An Ethical Question: Recycled Expired Food for Sale to Poor

I know how I feel about the ethics of this proposal but what are your thoughts?

Doug Rauch, the former president of Trader Joe’s, has started a nonprofit to establish an unusual type of restaurant/grocery-store hybrid in the Codman Square neighborhood of Dorchester in Boston, Massachusetts. The store will take food that has passed its sell-by date, cook it or prepare it for “quick-scratch” meals, and sell it to people in the area, under the logic that it will both provide low-cost access to healthy food and reduce food waste.

(When I lived in Dorchester a number of years ago, the same thing was being done, but at the local full-price supermarket. Buying meat there was like taking your life in your hands. Organizing by nonprofits occurred to prevent such substandard stuff being sold in poor neighborhoods.)

National Public Radio interviewed Rauch on September 21st. You can listen that interview or read a transcript of it here.

Here are the demographics of Codman Square as of 2010. 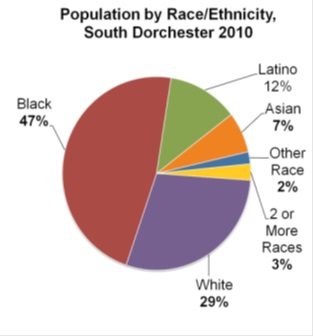 And here are the household incomes in Dorchester, compared against Boston overall.

According to the Boston Globe, the Urban Food Initiative has already raised $600,000 for the effort. The community is asking about questions of community control of the board, but there is clearly a sense of uneasiness about the whole endeavor. NPQ is concerned about the ethics of the proposal, but we are anxious to hear about it from you about it, also.—Ruth McCambridge