An Odd and Narrow Crowdfunding Solution to Homelessness

Social entrepreneurialism of a sort comes to us from Slovakia, where Michal Polacek, a recent graduate of the Academy of Art in Banksa Bystrica, came up with the idea of building homes for the homeless behind advertising billboards. The prototype he and his architecture and design firm partner Matej Nedorolik have concocted is a two-room wooden structure with thermal insulation and room for a table, two chairs, bed, toilet, sink, and shower inside the 200-square-foot abode attached to the unused backside of a billboard. Actually, it appears that Polacek’s “Project Gregory” prototype is yet to be built, as he and his colleagues are aiming to raise 41,000 euros through a Kickstarter campaign. They hope to build the prototype by next spring; after that, they plan to build 10 billboard homes in Slovakia.

What’s interesting about this CNN Money article is why it was written. On the Kickstarter webpage for Project Gregory, viewed on November 2nd, the project had raised only £373 from five backers toward its £41,000 goal—less than one percent. According to CNN Money, Nedorolik said that they had tried to raise corporate sponsorship for the project but got no takers, thus the switch to crowdfunding. Because Kickstarter doesn’t accept projects from all countries (Slovakia isn’t a Kickstarter-eligible country, apparently), Polacek and Nedorolik added Martin Lee Keniz to the team as an external partner, because he brought an essential resource to the team: his UK driver’s license (as a result, Keniz is on the Kickstarter page as the project sponsor). Project Gregory has until December 31, 2014, to raise its £41,000, else this venture turns into the effort’s corporate sponsorship effort and fails then too. 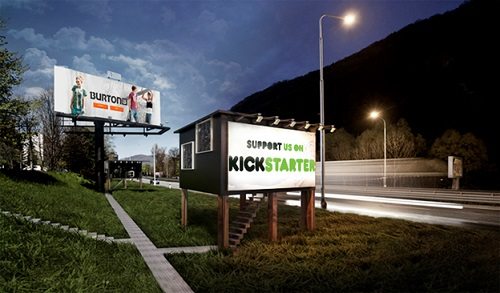 The creativity of Polacek and his partners is obvious, but wouldn’t it have been better to have brought this to an established organization with a multi-faceted regimen for fighting homelessness and figured out what role it might play in an overall strategy? That seems to be one of the significant weaknesses of crowdfunding, encouraging people to start new projects on their own rather than linking up with an infrastructure of organizations with experience, context, and networks to address a social problem more effectively than a one-off.—Rick Cohen