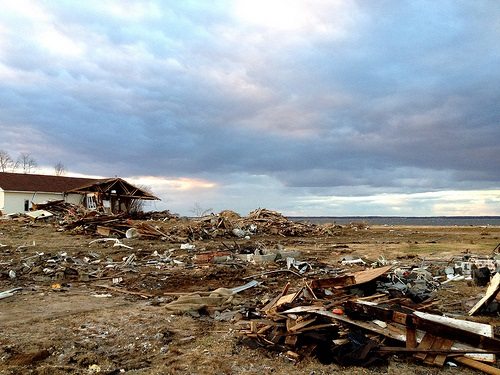 An unregistered Hurricane Sandy charity ended up actually donating a good chunk of the money that it raised—due to the intervention of the state government. A couple in Sparta, New Jersey adopted a great name for a disaster relief charity—the Hurricane Sandy Relief Foundation—and raised $334,000, but their organization was never a 501(c)(3). All the donor-education information produced by nonprofits doesn’t necessarily seem to have worked when it comes to preventing unregistered nonprofits from raising huge amounts of money under the guise of disaster relief.

One of the two founders, John Sandberg, told the Star-Ledger by e-mail that the organization distributed over $500,000 in goods throughout the tri-state area affected by the Hurricane. An AG’s court-appointed administrator, however, just recently awarded four grants totaling $225,000 of the Foundation’s money to O.C.E.A.N. in Toms River (which is building single-family homes), a food bank in Neptune to assist in rebuilding its food pantries, the Alliance Center for Independence in Edison for post-Sandy projects to help people with disabilities, and a fourth group in Rockaway, N.Y., called Graybeards. The court administrator plans to award another $100,000 soon.

Sandberg is still feisty, suggesting that the Department of Consumer Affairs targeted him and his charitable partner, Christina Terraccino, unfairly because their charity’s name sounded too much like the Hurricane Sandy New Jersey Relief Fund, established by Governor Chris Christie’s spouse, Mary Pat. The implication of his email is that he is pleased that the government is finally allowing the group’s proceeds to be distributed at last.

Nice sentiments, but it was a phony charity, not one that, in its lawyer’s words, simply had a couple of technical deficiencies to resolve before the state came down on it. But it may be worthwhile for readers to reflect on the background of the perpetrators of this “charity.”

According to the complaint filed by the Division of Consumer Affairs, Sandberg and Terraccino were no slouches. One day before the state’s emergency order and three days before Hurricane Sandy actually hit, Sandberg registered 110 Sandy/Relief domain names including words like “Sandy,” “Relief,” “New Jersey,” and “Fund.” (This wasn’t his first time; he did it 2011, too, registering domain names in Hawaii after a tsunami hit the islands.) In setting up his Hurricane Sandy website, Sandberg coded the site so that it would outrank other similar organizations in Google searches.

His website announced that the foundation was a 501(c)(3), which it wasn’t, and said that donors could send checks to an address that happened to be the home of his parents. On the homepage, Hanes and CSX were listed “sponsors” of the foundation. Both firms denied any connection with the charity, much less the use of their corporate logos on its website. CSX actually contacted Sandberg’s foundation to have its logo removed, threatening that its use constituted trademark infringement.

Sandberg and Terraccino had a Chicago firm called She Beads manufacture “Together We Are Strong” bracelets, which they marketed on the foundation’s website, pitching the $22 purchase price as charitable donations. Because the foundation wasn’t tax exempt, neither were the bracelet purchases, and She Beads contacted Sandberg and Terraccino demanding the $9,324 it gave them returned.

Within the first couple of months of the foundation’s fundraising, the foundation distributed aid in the form of a $1,000 Lowe’s gift card to the Moonachie First Aid & Rescue Squad and a $650 Lowe’s gift card to an individual. Other distributions included to a home oil company for service in the Sparta area where Sandberg and Terraccino resided, payments to Christmas Tree Shops, and for groceries at Pathmark and Stop n Shop. At the same time, however, the foundation transferred over $7,400 to the personal accounts of Sandberg and Terraccino. For a group that only began fundraising in October of 2012, it had over $587,000 in its accounts by January of 2013 and by mid-January had received donations from 1,999 persons or entities to the tune of more than $631,000.

This story unfortunately shows that it’s easy to register lots of domain names, it’s easy to convince donors and businesses that a nonexistent charity is real, and it is unfortunately perniciously easy to convince donors to donate generously during times of emergency and disaster even if the charity isn’t on the level. In this case, the state government was on top of this situation within months, but that didn’t stop the group from raising more than half a million under the guise of disaster relief. Isn’t there an even faster and more efficient way of stopping the likes of Sandberg and Terraccino from setting up unregistered charities, raising big bucks, and then potentially slipping away?—Rick Cohen