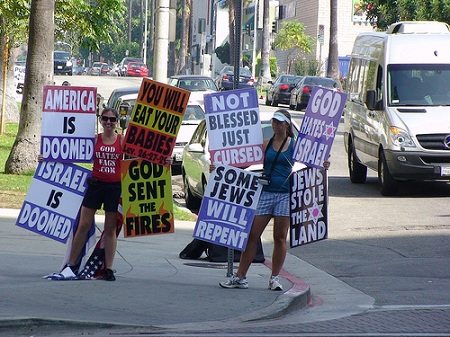 The Topeka, Kan.-based Westboro Baptist Church (WBC), known for anti-gay picketing at the funerals of servicemembers and celebrities, has announced that it will picket a funeral in Newtown, Conn. and the hacktivist group Anonymous has issued a stern warning that it is “coming after” Westboro, threatening the church in a video and hacking its website. As NPQ has recently noted, many gun control advocates have suggested that the horrible killings in Newtown may provide a tipping point for tightening gun control laws. The Newtown incident also has several groups calling for limits on WBC’s protests outside of funerals.

Westboro’s website says it will picket the funeral of Sandy Hook Principal Dawn Hochsprung on December 19. Members of the group have implied that they are protesting because Connecticut allows gay marriage. “The blood of the Newtown dead is on the hands of every preacher, teacher, parent and leader in Connecticut,” its website says. Anonymous, which has tangled with Westboro before, has threatened the church in a video narrated by what appears to be a computer-simulated voice, which you can see here:

“We will not allow you to corrupt the minds of America with your seeds of hatred,” the narrator of the Anonymous video says. “We will not allow you to inspire aggression to the social factions which you deem inferior. We will render you obsolete. We will destroy you. We are coming.” The hacker group also hacked into the WBC website and released personal information such as names, addresses, and e-mails of its members.

Meanwhile, thousands of people have signed two separate petitions that would classify Topeka’s Westboro Baptist Church as a hate group and strip it of its tax-exempt status. Yesterday, NPQ noted the support of a petition demanding gun control legislation on the White House “We the People” petition site. President Barack Obama has said that any petition that receives 25,000 signatures will receive White House review. As of Wednesday morning, five separate petitions active on the site, either to classify WBC as a hate group or to strip it of its tax-exempt status, had received enough signatures to meet the threshold for review. WBC has faced protests in the past from groups wishing to limits its activities. Several states have restricted it from protesting at funerals, although the U.S. Supreme Court ruled in favor of Westboro’s First Amendment rights after the father of a soldier objected to the group’s picketing at his son’s funeral. We welcome your thoughts on all of this. –Mary Jo Draper