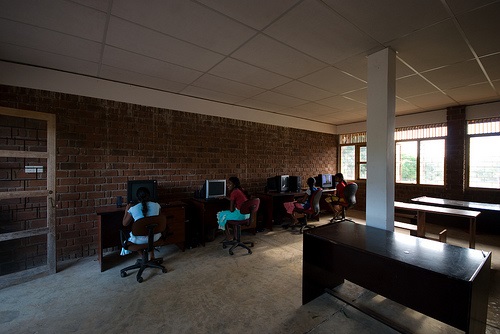 Architecture for Humanity’s tag line is “Addressing global humanitarian challenges with architectural solutions.” The group, which was supported in part by the Clinton Foundation, provided design for projects in areas devastated by natural or manmade disasters; these included Kosovo, Haiti, and the Gulf Coast. Though its budget and purview grew quickly, both were extremely variable, and project costs sometimes exceeded what was expected.

When its debt became overwhelming, according to board chair Matt Charney, the group tried to cut fixed costs, including payroll. It also sold its main building in San Francisco, moving to cheaper offices, but it could still not close its gap between income and expenses, so the remaining 30 employees were laid off on the first of January.

The group leaves behind a 60-chapter network, both domestic and international. “Our hope is they will continue this work in some fashion,” Charney said. “I don’t think Architecture for Humanity going out of business is going to stop the people dedicated to this work from doing this work.”

John Cary, the former executive director of Public Architecture, said that open questions remained about the culture and finances of the group. Still, he conceded, “one of the things Architecture for Humanity did best was capture the public’s imagination about the potential of design, particularly in times of disaster, in a way few before it ever had.”

“There were definitely cost overruns on projects,” Mr. Charney admitted, but went on to express his hope that “the issues that have caused the closure, while important, I hope the overwhelming good that Architecture for Humanity has done can overshadow that. We’re proud of the work.”

Cameron Sinclair said, “Part of our thought process was that if this is a truly sustainable organization, it should survive without its founders, and 15 years was a good time for that to happen…. We never had a deficit for 14 years; we grew exponentially. Our biggest problem was, I think we grew too quickly.”

Others suggest that the newness of the endeavor had worn off for fickle funders, although the need is still achingly there. “The travesty isn’t that the organization went over budget serving communities around the world,” said Margie O’Driscoll, former executive director of the San Francisco chapter of the American Institute of Architects, but that “humanitarian design isn’t considered a fundamental right. And that today, in San Francisco, it is easier to find funding for an app than to fund an organization which transforms lives in places most Americans don’t know exist.”

Unfortunately, as many in the sector understand, despite the problems founders can pose, they are often the kinds of driven personalities that attract loyalty and funding. It will be interesting to watch here to see how and whether the network functions once the central organization is gone.—Ruth McCambridge