Bill Easterly elicits strong feelings in aid and development circles. Some have described him as one of the sector’s leading authorities and a heavyweight economist. But not everyone is a fan. Humanosphere labels him “Bill Gates’ least favorite aid expert.” That’s because Easterly has built a career excoriating foreign aid and expert interventions.

In our podcast, we ask Easterly about his contentious reputation. He tells us, “A lot of people start characterizing your work who really haven’t read you very closely or even at all. They paint you as more extreme than you really are, and I think that has happened to me.”

We also ask the NYU professor about his recent focus on forgotten rights of the poor. “Poor people are actually a lot better than we think they are at achieving their own development, at getting the goods and services that they demand and need for themselves and their children,” he says. Easterly believes development discussions are off-balance because they typically overemphasize our own aid efforts instead of championing what the poor have achieved.

Easterly says the West’s patronizing attitudes manifest themselves in harmful ways. He points to the 2005 Live 8 concert against poverty, which was promoted by this poster: 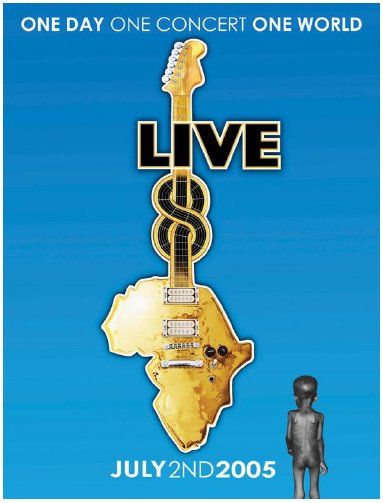 “That’s just such an insulting and unfair way to portray Africa, as being fundamentally about some degraded, emaciated child. That is not the typical African child, that’s not the typical African,” Easterly insists. “The typical African is a lot more likely to have an advanced degree than to be a victim of a famine.” He contends that the mischaracterization hurts investment in Africa, respect for its people, and everything that should be going well for the continent.

Easterly also denounces his former employer of 16 years, the World Bank. Citing the Bank’s own 2014 paper about its waning influence, he says there is an oversupply of action plans. “Martin Luther King’s most famous speech was not called ‘I Have a Plan.’ Change happens by saying ‘I Have a Dream.’”

To that end, Easterly is especially critical of donors who still do business with autocratic regimes, and says they must better support the democratic aspirations of poor people living in those countries. “We can’t just say that we’re only going to care about the material well-being of the poor and neglect entirely the thing that poor people — in Africa and around the world — are themselves fighting for.”

Democratic freedom brings economic and social progress too, he says. “There are people around the world, all the Martin Luther Kings that are now in jail in poor countries, that could be voices arguing for equality of rights of the poor. And that’s a powerful force for social change.”