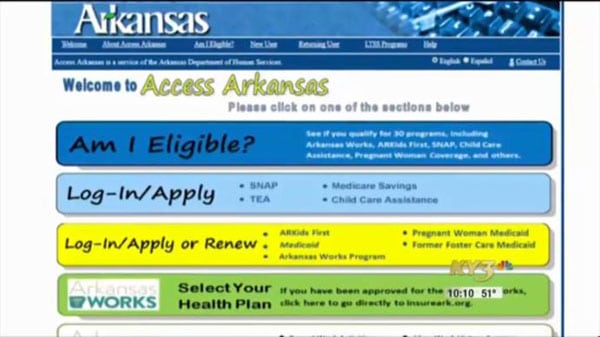 With the stated goal of “lifting people out of poverty” and the blessing of the Trump administration, Arkansas officials have begun assigning work requirements (with many exemptions for those who clearly cannot work) to Medicaid recipients. Noncompliance will result in the loss of health coverage, so the stakes are high for recipients as this theory is tested. Since its startup in June 2018, the program has met snag after snag, according to outside researchers and nonprofits working with Medicaid clients. Yet it is being praised as a model by Seema Verma, the administrator of the Centers for Medicare and Medicaid Services, which oversees the project. “I’m excited by the partnerships that Arkansas has fostered to connect Medicaid beneficiaries to work and educational opportunities,” she wrote on Twitter.

For most of those involved, it presents a conundrum of issues of access to information, technology, time, and transportation and in many cases, just understanding who these Medicaid recipients are. But the implementation issues discussed here do not even scratch the surface of the subject of whether it’s fair, useful, or a waste of government resources to impose work requirements upon those who might be “eligible” for this so-called lift out of poverty.

A recent study from the Urban Institute addresses the evaluative research on these programs and finds they do more harm than good. One finding was that those targeted by these programs are already motivated to work and, indeed, that the red tape associated with the programs cause people to lose needed benefits. In Arkansas, most of those targeted for this program were either already working or in an education program. They just did not make enough money to pay for the healthcare they needed. That is unlikely to change with the imposition of further work requirements.

In unwrapping the program, it targets a very limited number of Medicaid recipients. As Margot Sanger-Katz writes, “Arkansas officials, trying to minimize coverage losses, effectively exempted two-thirds of the eligible people from having to report work hours. Of the remaining third—about 20,000 people—16,000 didn’t report qualifying activities to the state. Only 1,200 people, about two percent of those eligible for the requirement, told the state they had done enough of the required activities in August, according to state figures.”

Why the small numbers? The reasons range from not knowing that the program existed and that they were required to work, to not having access to the technology to report their hours worked (the only way to report hours is through an online portal), to not being able to work because their life circumstances had changed. Given these reasons, the responses from those who are doing outreach for the program in Arkansas show their frustration.

Advocates for the poor, and the state officials in charge of the program, said the low compliance numbers suggested that many eligible people probably didn’t know the program existed. State officials said they worked hard to get the word out—mailing letters, sending emails, placing phone calls, briefing medical providers, putting posts on social media sites and distributing fliers where Medicaid patients might find them.

“I was literally taking fliers to the urgent care clinic when I was taking my kids to get tested for strep,” said Amy Webb, the chief communications and community engagement officer for the Arkansas Department of Human Services. “If there’s something we are not doing to reach people, if someone will tell us how to do that, we will do it.”

But it seems that not everyone opened or read their mail. Ray Hanley, the president of the Arkansas Foundation for Medical Care, which ran a call center for the state, told my colleague Robert Pear that many people never answered their phones. The state said the open rate on emails was between 20 and 30 percent.

In interviewing 18 Medicaid beneficiaries in Arkansas for an article in Health Affairs, Jessica Greene, a professor of health policy at Baruch College in New York, found that 12 of them were unaware of the work requirement. In her summary of her interviews, she states:

Of the people I interviewed who were at risk of losing Medicaid coverage as a result of the work requirement, most were at risk because they lacked awareness of the policy or were overwhelmed by it, rather than because they were not meeting the 80 hours a month of work-related activities or the terms of an exemption. If this is true more broadly, the state will be ending people’s health coverage for the wrong reasons, adding credence to those who argue this policy is about reducing the rolls, rather than supporting people to get employment.

A 38-year-old woman who recently had to quit her job to get her niece, who she mothers, a birth certificate and other paperwork to start school argued that the policy does not take into account the complex lives of low-income people. “You are saying this should be possible, but you don’t know my circumstances. You haven’t been here,” she explained.

The people who Greene interviewed also felt the government should be looking at raising the minimum wage and helping with issues of transportation to work to help people move out of poverty. They saw work requirements attached to healthcare as primarily being a means for the state to reduce the number of Medicaid recipients. The question for them, and for us, is whether these kinds of programs contribute to “lifting people out of poverty” or simply punish people for being poor. Notably, earlier this year, Philip Alston, a United Nations special rapporteur, published a report that specifically called on the US to “decriminalize” being poor.

In the meantime, many in Arkansas are losing healthcare coverage due to this program. Not because they are not meeting the work requirement—in most cases, they are working, and were working before this program went into effect. Rather, they are losing Medicaid because they did not receive notification of this requirement, failed to open their mail, moved, or lacked access to a cellphone or computer to report their hours online. In other words, as the research finds on this tired retread of a program, they are besieged with more red tape in pursuit of nothing but reinforcement of a narrative about the idle poor. The program is not designed with their circumstances in mind, and there’s no way they’ll be “lifted out of poverty” when they cannot even start to complete the steps. A similar program was stopped by a federal judge in Kentucky, because the judge found it failed to consider the health implications for those involved. Expect a similar suit in Arkansas as more of its working poor lose their coverage. Leaving poor people without healthcare will not get them out of poverty, nor will keeping them in jobs that cannot support their families. If you work, you should not be poor. Perhaps that is the starting place for this kind of requirement.—Carole Levine