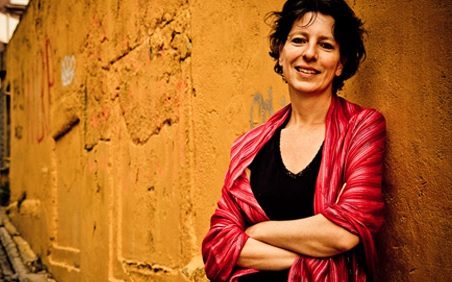 In an eerie replay of the trumped-up charges from the Egyptian government that three Al Jazeera journalists had been propagandizing for the Muslim Brotherhood, earning themselves multi-year prison sentences from President Abdel Fattah el-Sisi’s court system, Turkey has followed the Egyptian script and indicted Dutch freelance journalist Fréderike Geerdink. Her alleged crime was “making propaganda” for the Kurdistan Workers’ Party (PKK) and Union of Communities in Kurdistan (KCK). Having worked in Turkey for roughly a decade and based in the regional capital of the Kurdish area in Southeast Turkey, Geerdink has specialized in her reporting on the rights of Kurds and Turkish human rights issues overall.

Like the three Al Jazeera journalists who simply reported on the Muslim Brotherhood, Geerdink’s primary offense to the Erdoğan government is that she reported on banned Kurdish organizations and allegedly praised them while denigrating the Turkish government. It isn’t hard to imagine that Geerdink’s February 2014 book on Turkey’s 2011 massacre of 34 Kurds, mostly teenagers from villages in the Uludere district, didn’t endear her to the authorities, already quite sensitive about the word “massacre” in Turkish history (including other incidents involving Kurds, such as the Dersim massacre in the late 1930s).

What makes Geerdink noteworthy to Nonprofit Quarterly is that in addition to her freelancing, she was an active social media poster, favoring Twitter and eschewing Facebook, basically making her on-the-scene reporting free to her 27,000 Twitter followers and to whomever else might look on her website, JournalistInTurkey.com, or her “Kurdish Matters” blog. Social media is the vehicle that, even while carried on for-profit systems like Facebook and Twitter, functions for individuals, freelancers, and nonprofits as an alternative to having to buy time and space on commercial media.

The reason regimes are increasingly cracking down on social media journalists is that, in an odd way, they are more dangerous than traditional journalists.  Regimes can crack down and threaten editors and publishers of newspapers and magazines, but unless they restrict or completely ban Twitter and Facebook or even Internet providers such as Google, social media journalists like Geerdink represent constant 140-character threats.

NPQ took a look at some of Geerdink’s prolific tweets and found the reason why Turkish authorities had her indicted—she’s a reporter on the scene in the Kurdish area of Turkey, reporting on news items and populations whose issues, but for the likes of her and other intrepid journalists, get barely a scintilla of mainstream news coverage.

After 400 days in an Egyptian jail, Al Jazeera journalist Peter Greste was suddenly set free and sent to Cyprus on his way home to Australia. The two other Al Jazeera journalists, Baher Mohamed and Mohamed Fahmy, are still being held in prison, though Fahmy, who held dual Egyptian and Canadian citizenship, has just renounced his Egyptian citizenship, which will probably lead to his deportation, as it did Greste. Baher Mohamed is an Egyptian without the foreign citizenship option of his two colleagues. As we learned in our coverage of Robert Becker’s trial by the Morsi government of Egypt, as awful as the prospects are for foreign journalists and foreign NGO staff like Becker, Greste, and now Geerdink, the challenge for nationals imprisoned by the authorities in Egypt, Turkey, and elsewhere charged with reporting about people out of favor with government authorities is much more severe, dangerous, and permanent.

Take a look at Fréderike Geerdink’s websites and her tweets (@fgeerdink). Think about the danger she faces having been indicted by Turkish prosecutors, and imagine what is happening to the seven other journalists currently in Turkish prisons—six on the charge of being “anti-state,” one in prison with no charge listed—and the nine journalists aside from the three Al Jazeera staff in Egyptian prisons, all nationals, without prospects of their home countries buttonholing their Turkish and Egyptian counterparts to press for their release.—Rick Cohen