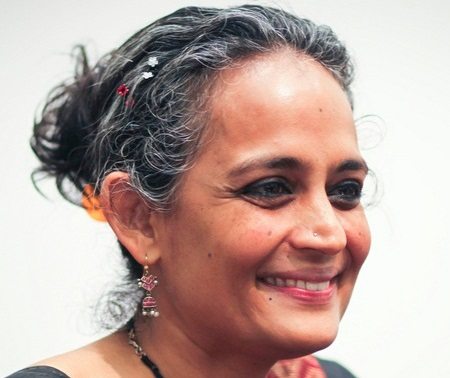 If you’ve read Arundhati Roy’s The God of Small Things, you know this Man Booker award-winning author is an amazing, gifted writer. If you’ve read Field Notes on Democracy: Walking with Grasshoppers or Walking with Comrades, just to name two of her several politically oriented books, you know she is an unsparing and relentless critic of the excesses and inequities of capitalism. AlterNet has recently excerpted and published the part of her newest book, Capitalism: A Ghost Story, which examines corporate philanthropy.

“What follows in this essay might appear to some to be a somewhat harsh critique,” Roy admits. “On the other hand, in the tradition of honoring one’s adversaries, it could be read as an acknowledgment of the vision, flexibility, sophistication, and unwavering determination of those who have dedicated their lives to keeping the world safe for capitalism.”

After presenting a history of examples of corporate politics playing out in the history of corporate philanthropy, citing Rockefeller, Carnegie, and Ford as examples, she jumps to linking past and current corporate philanthropy to the Council on Foreign Relations, the World Bank, the International Monetary Fund, the Aspen Institute, and the Trilateral Commission. Roy targets the corporate philanthropic support for capitalist economic structures in Third World countries and, in particular, capitalism’s focus on inducing people to take on crippling levels of debt, as especially damaging. In that regard, she criticizes Muhammad Yunus and the Grameen Bank—in fact, the entire microcredit industry, which, she says, has been responsible in India for hundreds of suicides by borrowers.

“Corporate-endowed foundations administer, trade, and channel their power and place their chessmen on the chessboard through a system of elite clubs and think tanks, whose members overlap and move in and out through the revolving doors,” Roy concludes. “Contrary to the various conspiracy theories in circulation, particularly among left-wing groups, there is nothing secret, satanic, or Freemason-like about this arrangement. It is not very different from the way corporations use shell companies and offshore accounts to transfer and administer their money—except that the currency is power, not money.”

There is plenty to critique in the history of corporate philanthropy (as one example, Roy cites the Rockefeller Center’s “blasting off the wall” Diego Rivera’s mural because of its portrayal of “reprobate capitalists,” roughly the corporate equivalent of the Taliban’s dynamiting of the Buddhas of Bamiyan) and in the priorities and operations of the World Bank and the IMF (Roy’s references to the Aspen Institute fit somewhat poorly, as there is little to suggest that the talk, talk, talk of Aspen gatherings really amounts to very much). However, the analysis tends to look backwards rather than forwards. References to Bretton Woods and the Trilateral Commission feel hackneyed and archaic. Roy could do more with her critique if she wanted with a deeper analysis of corporate philanthropy’s promotion of Third World indebtedness through microcredit, or an examination of more of the complex operations of corporate philanthropy today, supporting charities that are subtly expected to line up behind corporate sponsors (see the NPQ Newswire on the influence of Comcast and other telecom corporations on civil rights groups regarding “net neutrality,” for example).

Perhaps a more detailed analysis is to be found in Roy’s book, as opposed to what is in the brief excerpt in AlterNet. A full debate over corporate philanthropy would be worthwhile and good for the philanthropic and nonprofit sectors. Maybe Roy could do it, but this isn’t it.—Rick Cohen