Athletes’ Charities Pay Off for Prolanthropy 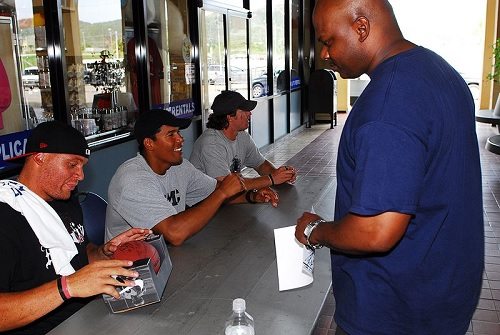 Sports philanthropy occurs at the intersection of two converging interests: the legitimate and frequently hugely admirable intentions of professional athletes to use some of their wealth to help people, and the interest of sports agents and teams in presenting a positive image of athletes—sometimes even writing charitable giving into athletes’ contracts. Sitting at that intersection are for-profit firms such as Prolanthropy, based in Florence, Kentucky, and run by one Jeff Ginn. In an interview with Positive Impact magazine, Ginn describes in general terms how he created his firm, which manages the philanthropic interests of a number of professional athletes, including 21 charitable nonprofits.

Citing his experience on the board of an athlete’s foundation, he saw a need that a firm like his could fill:

“There are a lot of athletes that want to give back. They didn’t, though, for a number of reasons—they were smart enough not to have a foundation that they didn’t know how to manage,” he said. “Sometimes they were scared to death of what could happen, worried about how it could be sustainable, or just didn’t know what they were doing. I knew we could help.”

Jared Hopkins, writing for the Chicago Tribune, has an in-depth article about the kind of help that Prolanthropy actually offers. He questions whether it is helping athletes’ charities do the right thing by handling their accounting, public relations, and fundraisers. Among the issues Hopkins raised were the failure of some of the 21 charities to register with the governments of the states in which they were soliciting contributions; even Ginn’s Prolanthropy failed to register. In addition, Prolanthropy often chooses to be compensated by a percentage of the revenue raised by the athletes’ charities, a practice frowned upon by national fundraising trade associations but defended by Ginn, in that his organization provides much more than fundraising services to its clients. (On its website, Prolanthropy says it provides “charity and event management” services, as opposed to aid specifically with fundraising.)

There is no doubt that whatever the questions about Prolanthropy or the specific interests of some athletes and their agents, there is a lot of sincere commitment among the athletes, notably Prolanthropy client Charles Tillman, a cornerback for the Chicago Bears, who won the Walter Payton Man of the Year award from the NFL this year for his community service.

Hopkins called on Charity Navigator, the BBB Wise Giving Alliance, and other charity watchdogs to comment on the low proportion of funds raised by Prolanthropy’s charities devoted to program, issues around transparency and the absence of independent accountant compilations and reviews, and inadequate numbers of independent board members. A couple of Prolanthropy’ s clients registered with their states after the Trib started its investigation.

Of course, the underlying issue is that this is another incursion of the profit sector into charity and philanthropy. It’s hardly new, but the public has good reason to wonder about how much of a profit center charity has now become for for-profit firms. The rather large fees being charged to charities by for-profit telemarketers have already raised questions about whose interests are being served by some people purportedly servicing the nonprofit sector. In the case of Prolanthropy, it appears that Ginn’s business model is reasonably lucrative. Hopkins reports that at least one of his clients was contractually obligated to pay Prolanthropy a management fee of 22.5 percent of gross revenue plus an additional fee of 20 percent of the value of goods and services donated to the company. Tillman’s charity promised to pay Prolanthropy 20 percent of the gross value of donated goods and services worth more than $10,000 plus a percentage of the Tillman charity’s gross revenues.

After reviewing the often-short lifespans and limited accomplishments of many charities and foundations created by athletes, mentioning in the process the Impact Foundation of Indianapolis Colts linebacker Gary Brackett, managed by Ginn’s Prolanthropy, the Indianapolis Business Journal weighed in with a perspective that makes sense. “We agree wholeheartedly with former sports agent Milt Thompson, who advises athletes to support existing charities instead of forming their own,” the IBJ editorialized. “With more than a million agencies already in place—including 60,000 or so in Indiana—it’s hard to believe that many, if any, athlete-driven not-for-profits are addressing unmet needs.”

Does Ginn client Ryan Kerrigan, probably the best linebacker of the Washington, D.C. NFL franchise, need Prolanthropy to run a new charity in his name—“Ryan Kerrigan’s Blitz for the Better Foundation,” marketing itself as a 501(c)(3) public charity even though it wasn’t (or at least hadn’t received IRS approval of its charity status), despite having run two charity fundraisers? If Ryan were interested in giving money himself, he could have donated to or through D.C.’s well-respected community foundation at a cost undoubtedly much less than the percentage that Ginn’s Prolanthropy takes off the top. If he wanted to use his name and profile to mount fundraisers for children’s charities in the region, he could have found any number of groups willing to have him connected to their efforts, with a much higher proportion of the take going directly to the charities than to outside consulting firms.

Ginn defends his practices and fees as a charity and events management firm serving pro athletes as “perfectly consistent with the industry.” Perhaps that’s the case. Either way, the problem is the insinuation of the for-profit sector into charity and philanthropy, with pretty reasonable rates of return because of the year-in and year-out generosity of the American public willing to contribute through for-profit entities such as Prolanthropy. Isn’t it time for the nonprofit sector to start reducing the take of for-profits from their charity business lines and to get celebrity fundraisers and donors such as pro athletes to follow the examples of some of their peers and eschew the for-profit firms in favor of dealing directly with and through nonprofits such as community foundations?—Rick Cohen