Attention to Refugees Ever More Important as Numbers Rise 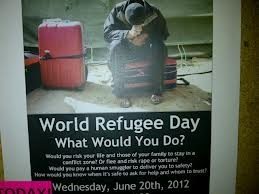 World Refugee Day was observed last week, and it is ever more important to recognize the parameters of this issue, because they are expanding.

The U.N. refugee agency announced recently that the world’s population of refugees had increased by 6 million between 2012 and 2013. For last year, the 51.2 million refugees included 2.5 million new refugees from Syria and another 6.5 million people displaced within the war-torn country.

If the refugee census were conducted today, it would include another 1 million refugees who have been displaced in Iraq just this year, half of them in the last couple of weeks. Last week, on June 20th, it was World Refugee Day. According to Susan F. Martin, the day “commemorates the strength and resilience of people forced to leave their homes because of war and serious human rights violations.”

Given a 13.3 percent increase in the number of refugees, it seems that the world is doing a very poor job in reversing this dynamic. Martin asks, “how can the international community ensure adequate and effective assistance and protection for the world’s refugees and displaced persons—regardless of the reasons they are forced to move?” In light of recent events in Iraq, the challenge of a solution starts with ceasing the propensity of the nations of the world to create refugees due to sectarian and other kinds of warfare.

The news cycle’s attention span is so very short. Last year, people were beginning to recognize the massive refugee problem in Syria, exacerbated by the Assad regime’s strategy of impeding access for providers of humanitarian relief. Now, Iraq has pushed the continuing civil strife in Syria out of the news headlines, so the thousands of Syrians who continue to be added to the numbers of refugees (including those who now comprise a quarter of the population of Lebanon) don’t get much attention.

And neither do Iraqis, for that matter. Other than the UN reports, there is little coverage of the million people who have been displaced by the disintegration of Iraq. Nonprofits and foundations tend to think about their roles in generating resources for relief, but the answers are as much in politics as philanthropy. Nonprofits that are aware of and engaged in issues of refugees issues have to be active addressing public policies—like the U.S. invasion of Iraq in 2003—that are likely to create the ever-increasing displacement that now afflicts well over 5 million people.—Rick Cohen