Back in Action: Kony 2012 Group to March in D.C. on Saturday 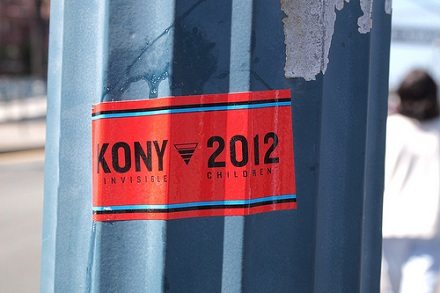 The social media event of the year—the Kony 2012 video—is getting a follow-up in a planned Invisible Children (IC) march in Washington, D.C. on November 17th led by IC co-founder Jason Russell. Apparently, Russell has recovered from his heavily publicized breakdown and hospitalization in the wake of the original Kony 2012 effort. This campaign is called MOVE: DC, and is billed on the IC website as a “Global Summit on the LRA” (i.e., the Lord’s Resistance Army, the outfit that Kony leads somewhere in Central Africa).

The IC website says that it has confirmed the participation of representatives of Ugandan president Yoweri Museveni, United Nations Secretary General Ban Ki-moon, and Nkosazana Dlamini-Zuma, the chairperson of the African Union, among others. IC’s website asks supporters to inundate U.S. President Barack Obama and Sudan President Omar al-Bashir, to name two, who haven’t yet confirmed. Of course, there’s something to sell: a $10 Kony 2012 T-shirt showing a Democratic donkey and a Republican elephant connecting as a dove with an olive branch. The website instructs, “Wear your KONY 2012 shirt to MOVE:DC. You’re going to need it.”

Black Star News editor Milton Allimadi appeared on KPFA, the Pacifica-affiliated San Francisco Bay area radio station, to discuss the new Kony initiative with KPFA news anchor Anthony Fest and writer Ann Garrison. What seems to have Allimadi and others particularly irate this time around is the Invisible Children’s use of images from Martin Luther King Jr.’s March on Washington for Jobs and Justice to promote the Kony event on November 17th. Allimadi calls it “repulsive.” Garrison notes that “Russell and [Invisible Children co-founder Jedediah] Jenkins also promised a global dance party and a global summit on the LRA, featuring 10 international leaders, who, they say, will show up if thousands of young people register in advance and arrive, preferably wearing one of the KONY 2012 T-shirts that they’re selling online.”

According to an article in the Monroe County Community College newspaper in Monroe, Mich., the MOVE: DC program will begin with representatives of the 10 invited leaders (though not all have committed yet) on stage at the D.C. convention center to answer what they are doing to “stop Kony, the worst criminal in the world.” That will be followed by a march to the White House, surrounding the Obama residence with T-shirt clad activists. The program will culminate with the “after party,” a “massive dance party” demonstrating “the fun side the activist group.”

There hasn’t been a lot of high-profile public discussion of this planned Invisible Children venture like there was this past spring with the original Kony 2012 activism and the viral video. Where is the social media juggernaut for MOVE:DC by an organization that launched what might be the biggest online video campaign for a social or political cause ever? What is Invisible Children now? We take note of the very unusual description Invisible Children offers on its blog:

“We believe IC is not just a charity, but a group of people choosing to live differently. This blogizine highlights what we’re up to as an organization, what inspires us, challenges us, and makes us laugh. It’s our collective mind written down…We believe in the equal and inherent value of all human life. We believe that a worldview bound by borders is outdated and that stopping injustice anywhere is the responsibility of humanity everywhere. We call this ethos the Fourth Estate.”

Although most people use the term “fourth estate” to refer to the press, Invisible Children seems to use the term to refer to its social media-oriented grassroots youth movement. We can’t predict what will happen on November 17th at the convention center in Washington, D.C., but we are incredibly eager to see what develops in this latest phase of what is truly a distinctive nonprofit organizing campaign.—Rick Cohen