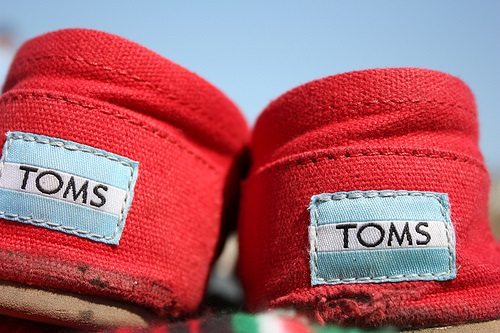 Toms is a well known socially responsible business, a shoe manufacturer that donates a pair of shoes to a needy child for every pair it sells. This business model has attracted an unusual investor: Bain Capital.

Toms just announced it would sell half the company to Bain. The deal will give Bain Capital 50 percent ownership, with the other half retained by Toms founder Blake Mycoskie. Toms is worth apparently something like $625 million.

Toms claims to have given away more than 25 million pairs of shoes during the history of its operations. Its eyewear division, according to Bloomberg, “has helped save or restore the sight of more than 250,000 people.” The Bain deal gives Toms capital to support new distribution outlets in Europe and Asia plus more locations in the U.S., along with investment dollars for expanding into new business lines.

The impression one gleans from the Bloomberg article is that Bain Capital’s acquisition of half of Toms reflects Bain’s belief that social enterprise is or can be profitable. That belief seems to be shared with other investment groups, given the report from Forbes that Bain Capital beat out other competitors for buying into Toms. Mycoskie will remain at the Toms helm, but in this deal, he will be $300 million dollars richer. Beyond the social enterprise model of the shoe giveaways, the announcement of the transaction also included a pledge that Mycoskie would devote half of the profit he makes from the deal toward a “fund to support social entrepreneurship,” which would be matched by Bain.

The Toms business model is “one-for-one”—for example, for each pair of shoes sold, a pair is donated; for each eyeglass frame sold, one is donated; for each bag of coffee sold, a week’s worth of clean water is made available to a person in need. With this new infusion of wealth that he plans to use in a new social enterprise fund, maybe Mycoskie might do a one-for-one there, too: For every dollar the fund invests in a for-profit social enterprise, he might make a dollar available as legitimate philanthropic investment in a nonprofit social enterprise, which are often just as entrepreneurial as some of the for-profit models, if not more so, but don’t include the need for a profit in their motivations. Just a thought.—Rick Cohen