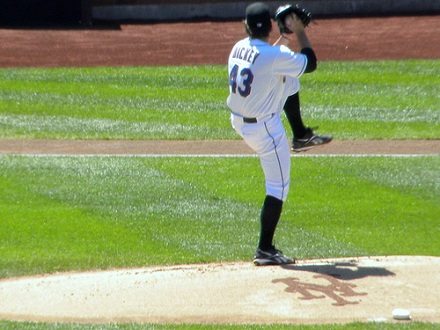 Mets knuckleballer R.A. Dickey may not win the Cy Young Award (which this writer hopes will go to Washington Nationals pitcher Gio Gonzalez), but he just won the 2012 Branch Rickey Award, which honors one baseballer a year for his charitable activities. Branch Rickey, as NPQ Newswire readers know, was the general manager of the Brooklyn Dodgers who signed Jackie Robinson to a minor league contract in 1945 and then brought him up to the big leagues to play for the Dodgers in 1947, breaking Major League Baseball’s color barrier.

The award, created by the Denver Rotary Club, honors major leaguers for their community service per the Rotary International motto, “Service above self.” Each team nominates one player, coach, or manager for the award each year. Like the charitable giving associated with the teams’ foundations, the typical nominees are contributors to rather standard charities. Past winner include Curt Schilling and San Diego Padre pitcher Trevor Hoffman, who were active with charities fighting specific illnesses, ALS or “Lou Gehrig’s disease” in the case of Schilling and kidney disease in the case of Hoffman. Another theme is disaster relief, with Bobby Valentine, during his time as manager of the Mets, contributing to September 11th causes and Diamondbacks outfielder Luis Gonzalez pitching in on Hurricane Katrina relief.

This year’s winner, R.A. Dickey, is a very different sort of baseball player and maintains a very different approach to philanthropy. Dickey won this year’s award for distributing baseball equipment and medical supplies in South America. By climbing Mt. Kilimanjaro in Tanzania, he also raised $100,000 to help women in India who have been forced into prostitution in Mumbai, although that charitable activity had his team, the New York Mets, steaming that their star knuckleballer might have gotten injured.

Like his knuckleball, perfected rather late in his career, R.A. Dickey is cut from a different cloth. Give the Mets and the Denver Rotary some credit for being willing to go with a Branch Rickey award winner who is hardly mainstream as a player, person (read his autobiography, Wherever I May Wind Up: My Quest for Truth, Authenticity and the Perfect Knuckleball, which discusses his life in ways you’ll never see in other sports bios), or humanitarian. Wouldn’t Dickey be a good candidate for the NPQ board of directors?—Rick Cohen