Bathroomgate at the Breakers: The Vanderbilts vs. the Preservation Society 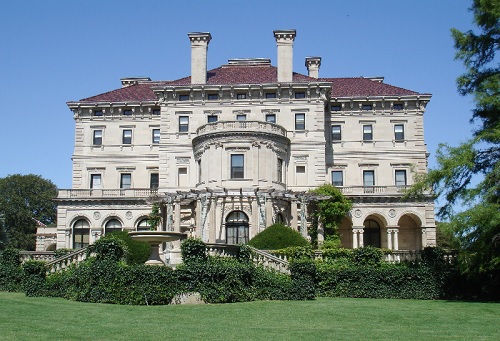 In organizational development, we know that all kinds of things can affect organizational culture, including the field of work, your community, and your donors. These influences have produced a Gilded Age drama worthy of Masterpiece Theater in Newport, Rhode Island.

The historic Breakers mansion in Newport, Rhode Island (or cottage, as it was then known), built in the 1890s by Cornelius Vanderbilt II, has 70 opulent rooms but no public bathroom facilities—despite the fact that it has 400,000 visitors each year. The Preservation Society of Newport County which owns the landmark, therefore, has plans to build a discrete visitor center so that they can get rid of the “porta–potties in a tent” setup now in place outside the gate. But this idea has inflamed some of the surviving members of the family, two of which live on the third floor of the mansion when they choose to.

Twenty-one members of the Vanderbilt family, including Gloria Vanderbilt, recently delivered a letter to the Society voicing objections to the center (among other things). They say that they will withhold their support in the form of money or family objects while it remains under “the current leadership climate.” Some family members have said that they had been excluded from decision-making on the issue of the visitor center and, more generally, they are of the mind that nothing should sully the integrity of the grounds.

The chairman of the Preservation Society, Donald Ross, rallied with a seven-page response, a copy of which was passed along to the Associated Press. Hold on to your hats, because it is rough sailing here.

First, to provide a sense of context, here is a snippet from a 2013 NYT writeup about the rancor in the situation:

“Helen Winslow—widow of John Winslow, once president of the society—said she felt compelled to publish a letter in the Newport Daily News opposing the project. Ms. Winslow, who is 94, said Donald O. Ross, the society’s chairman, subsequently upbraided her as she was having Sunday lunch at her beach club, after which she received a written apology from Mr. Ross’s wife, Susan. (Asked about this, Mr. Ross said, ‘I just don’t think it’s relevant.’)”

In the Ross seven-page response to the letter from the Vanderbilts, he makes the point that of the 21 signatories, only eight have donated money in the last two decades and, for that matter, in the last five years, they have donated a grand total of only $4,000. Further, he asserts, most of the items on loan from the family to be displayed at the mansion are less than significant and make up only around seven percent of the objects on display there.

“Many of these objects are not in and of themselves irreplaceable or highly significant—some are as minor as hairbrushes or wastebaskets. They lend personality and authenticity to the spaces, but none are essential to the visitor experience,” Ross wrote, adding that he could evict the family members from the third floor “at any time.” The Vanderbilts sold the grounds to the Preservation Society for $366,000 in 1972 with no restrictions or pledges, and since then the society has spent $20 million on its upkeep.

It is endlessly interesting to watch how culture intrudes into the management of many nonprofits. Understanding the habits and artifacts of your own culture can be very helpful in managing the issues that emerge from it.—Ruth McCambridge