Bill Clinton Should Have Talked Philanthropy in Eastern Kentucky 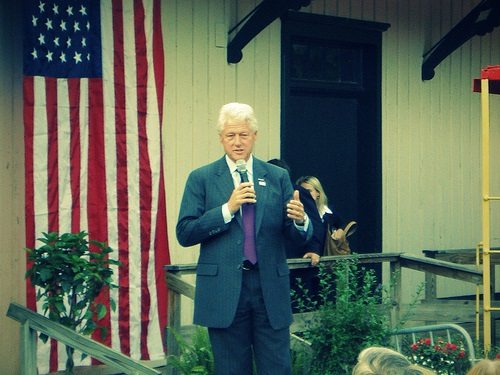 In the past few elections, some nonprofit activists have birddogged political candidates in the hopes that they could be prompted to say something banally positive about nonprofits: “I (HEART) nonprofits,” or something equally as moving. In most instances, it wasn’t all that difficult to get the candidates to utter a few often insincere syllables that would leave the birddoggers apoplectically happy, as though they could later show up in the election winner’s office and say, “Remember what you said about nonprofits…?”

Bill Clinton isn’t a candidate for anything anymore, except perhaps for post-presidential philanthropist for all eternity, and his partner Hillary Rodham Clinton isn’t an official candidate for anything—yet. But the former president is a valuable political commodity and was scheduled to show up in Hazard, Kentucky on Wednesday as a show of support for Alison Lundergan Grimes, the Democratic candidate running against Senate Minority Leader Mitch McConnell. Dee Davis, the publisher of the Daily Yonder, wrote to ask whether “the Big Dog” might use his time in visiting the coal fields of Kentucky “to say something that matters more than who gets elected.”

A big dog himself, Davis made specific suggestions for the former president’s presentations. Following his visit to Hazard back in 1999, when he pitched the new markets program for rural communities and inner cities, Clinton “could…make the case for a transcendent rural America…And he could take this moment to make an honest speech about Eastern Kentucky that gets beyond two candidates squabbling over who loves coal operators more and the EPA less.”

Knowing Clinton’s speech style—meandering, with brilliant verbal choreography that would keep his audience spellbound with stories about McConnell that people might not know (and might not like once they do), spiced with some self-deprecating humor, personal stories, and inspirational words for the future, Davis offered three ideas for what the former president could have done in his Hazard, Kentucky pit stop:

$11)    “He could tell us to find some courage. We need not fear EPA’s 2030 emission standards, climate science, or radical environmentalists from Mars. If Appalachian mountain communities are going to do better than just survive, they are going to have to take a hard look at what we got that the future wants. Spoiler alert: It’s not coal. It’s fresh water, clean air, what we can grow and build, and it’s creative kids who can solve everyone’s problems, not just our own. And that means connecting to distant markets and stranger people than we are used to. And we can’t get there from here by whining about the past or venting our spleens about the present. We must be dauntless.”

$12)    “He could tell us to take care of one another. This U.S. Congressional District is the least healthy in the nation with the lowest life expectancy. Health is an economic engine that works. We have five times the number of health care workers as miners. We can look after the afflicted, rehabilitate the addled, and restore abused land so it can nurture us again. Dr. Helen Lewis says every child has the right to a clean glass of water. If we can rally around common goals like making our water safe and accessible, we don’t just get the sewage out of the creek and the toxic metals out of our watershed, we change the value of our homes, our communities, and our prospects.”

$13)    “He could tell us to raise the bar. I was just at a meeting in Harlan County about what Eastern Kentucky should do next. One guy said, when we were all in the mines we had a common vision. We knew each week what we needed for production and what we needed to get everyone home safe. We need a vision to unite us now.”

Powerful stuff, but Davis added the following: “The former president could tell us…we can’t wait around for an intervention. No one’s coming to help until we change the direction.” Unfortunately, that’s not enough, given Clinton’s new career as the super-plenipotentiary emblem of modern philanthropy, able to get philanthropic dollars out of U.S. corporations, Canadian financiers, and Middle Eastern sheiks to deploy against the world’s problems through the vehicles he has created in the Clinton Global Initiative and the recently renamed Bill, Hillary & Chelsea Clinton Foundation. Eastern Kentucky—in fact, all of rural America—has seen much of its wealth excavated and relocated into the hands of corporate moguls. Some of these titans of capitalism have created private foundations that have a particularly significant similarity—consistently creative underfunding (or non-funding) of rural America.

The foundation community has long been interested in convincing the likes of people such as Davis that philanthropy is appropriately attentive to rural communities, but Davis and others have never been particularly swayed by the glossy brochures, the nice conferences, and the strategically directed grants to communities that are represented by influential members of the U.S. Congress. Davis actually leads the Center for Rural Strategies, which has long promoted the importance of increased rural philanthropy and shown little tolerance for the feeble excuses of philanthropy writ large for rural underfunding. (Note: The Daily Yonder is published by the Center for Rural Strategies.)

One person really knows this story. His name happens to be Bill Clinton. The former president was a speaker at the second of the rural philanthropy conferences convened by the Council on Foundations in Little Rock, Arkansas, in 2009. Already a philanthropist by that time, Clinton told the COF audience, “The foundation activity in rural America has been woefully inadequate.” Davis was right there, recording Clinton’s speech from the front seats.

Davis knows that the overseers of nearly one trillion in tax-exempt dollars have not heeded Clinton’s admonition in 2009 that they had to do something, anything at all, to make up for their unimpressive rural philanthropy track record. It would have been remarkable for the former president, now irrepressible philanthropist, to get up in Hazard, look at the crowd that gathered to hear his speech, and remind them that some of the resources they might deploy to find their way out of Appalachia’s poverty are sitting in philanthropic endowments controlled by people who, based on their grantmaking, haven’t been doing much thinking about Eastern Kentucky and places like it. By all reports, it appears that the former president and current philanthropic fundraiser took a pass on Davis’s and our prescriptions, choosing to go with the stock political rah-rah speech instead.  Maybe next time, Bill Clinton will be the Bill Clinton only he can be.—Rick Cohen