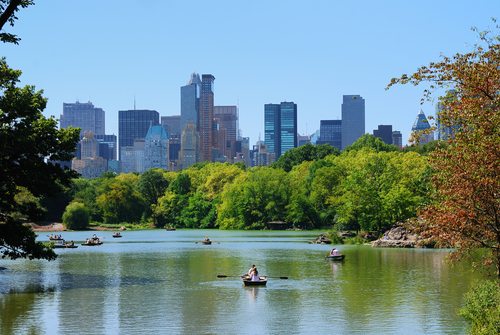 John Paulson makes good use of Central Park, running or cycling there on many days, and in appreciation, he has pledged $100 million to the Central Park Conservancy. If fulfilled, it will be the largest contribution ever to a public park and the largest contribution that Paulson, a billionaire hedge fund manager, has ever made to anything. Paulson says that he wants his gift to help maintain the park as an “urban oasis.”

The New York Times reports that Paulson, who sits on the board of the Conservancy, has a lifelong relationship with the park and quotes him on his motivation for the pledge: “Walking through the park in different seasons, it kept coming back that in my mind Central Park is the most deserving of all of New York’s cultural institutions. And I wanted the amount to make a difference. The park is very large, and its endowment is relatively small.” A former parks commissioner commented that the gift will help see to it that the park is not, as the Times puts it, “loved to death” by its 40 million annual visitors.

Paulson made much of his money by betting on the collapse of the real estate market.

In New York, a gift of this size to a public institution is large but not unprecedented. In 2008, Stephan Schwarzman, founder and CEO of The Blackstone Group, made a $100 million donation to the New York Public Library. In 2011, James Simons, founder of Renaissance Technologies, gave $150 million to Stony Brook University, which is part of the State University of New York (SUNY) system. That contribution will support “medical research, 35 new endowed professorships, undergraduate scholarships, graduate fellowships, and the construction of a new life sciences research building,” according to Forbes, which also reports that Simons has given away more than $1.15 billion overall (which nonetheless pales in the shadow of fellow hedge fund honcho George Soros, who has given away more than $8.5 billion).

The Paulson Family Foundation needs to make some big gifts. It was founded in 2008 with a $100 million contribution, and it has since grown its asset base to $565 million, according to Forbes, but grants from the Foundation in its first three years totaled less than $8 million. Soros, of course, is committed to spending down all of his assets, but if Paulson is to pay out the required five percent this year, spending will have to be stepped up significantly in comparison to those first three years.

Meanwhile, other New York parks have not been doing so badly with the rich set lately, according to the New York Times. The Diller-von Furstenberg Family Foundation recently pledged $20 million to the High Line Park on top of two previous gifts totaling $15 million. And Joshua P. Rechnitz pledged $40 million to create an enclosed speed cycling track at the Brooklyn Bridge Park. –Ruth McCambridge