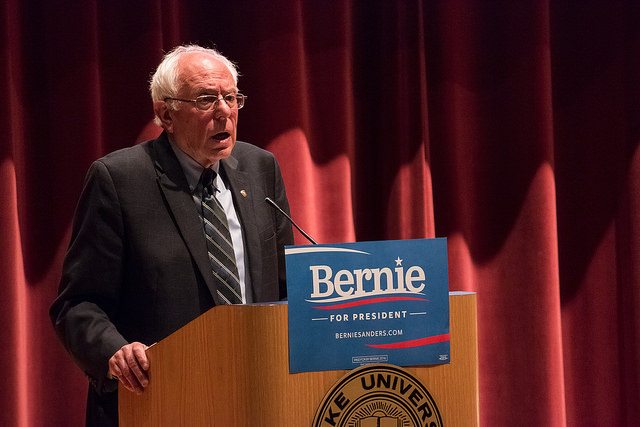 As the 2016 election campaign takes off, there will be more events like the presidential candidates forum at the Netroots Nation conference in Phoenix this past weekend, but perhaps with a somewhat different format. Although Hillary Clinton chose to pass on the event, two of her more liberal challengers, former Baltimore mayor and Maryland governor Martin O’Malley and Senator Bernie Sanders showed up to speak and found the event taken over by protesters.

Shortly into O’Malley’s appearance, some 100 protesters, apparently from the groups Black Lives Matter and the Black Alliance for Just Immigration, took over the stage. Given the microphone, the protesters raised concerns about the deaths of blacks in police custody, specifically challenging O’Malley, who as Baltimore’s mayor had been criticized for police tactics. However, the Washington Post coverage indicated that the protest wasn’t explicitly directed at O’Malley, as protesters stayed on the stage when Sanders appeared and disrupted his comments as well.

“It’s not like we like shutting shit down, but we have to,” Patrisse Cullors, co-founder of Black Lives Matters, told the Netroots Nation attendees.

Although O’Malley apparently acquiesced to the program takeover, Sanders displayed less equanimity, telling the protesters, “Whoa, whoa, let me talk about what I came to talk about for a minute.” Though he was heckled like O’Malley, Sanders kept talking, responding to a question about what he had done in the Senate to benefit black Americans. He responded by citing the Affordable Care Act, which generated a response of “We can’t afford that” from Elle Hearns, identified as a coordinator of the LGBT rights group, GetEqual.

The event raises the question of how exactly to protest at presidential forums, whether Democratic or Republican. At the Netroots Nation event, O’Malley’s presentation was initially drowned out by protesters chanting, “What side are you on?” When O’Malley tried to discuss what he had done as Baltimore’s mayor, protesters shouted him down again, and erupted again when he said, “black lives matter, white lives matter, all lives matter.” Protesters said that they took over the program because of feelings that their issues were “not being heard” and that black America is “starved for resources” and “in a state of emergency.”

One might ask whether it makes sense to protest at a Democratic candidates forum lacking the leading candidate, Hillary Clinton, undoing the O’Malley and Sanders presentations but letting Clinton continue her Calvin Coolidge-like campaign approach. A protest that raises questions of candidates but doesn’t give them a chance to fully respond with specifics doesn’t accomplish much. There were real points to be made, such as concerns that Sanders’s focus on income inequality doesn’t really get to issues of racial inequality, a contention raised by Angela Peoples, a co-director of GetEqual. There was much to discuss and bring to the surface, but the question is whether the disruption got there.

On the other hand, the Netroots Nation crowd, other than the protesters, was largely white, suggesting that one of the underlying objectives of the protest might have been to challenge white progressives, not just the presidential candidates, on issues of race. However, the challenge of Ciara Taylor from Dream Defenders in Miami, to hear from “white progressives who say they’re on our side [are] saying something has to be done,” could well lead to bland affirmations with no specifics or depth.

A second issue might have been about the preparation of the candidates for protests. One would think that in the wake of protests in response to the killings of Freddie Gray, Eric Garner, Michael Brown, Tamir Rice, and Walter Scott, to name a few of the black men who have died at the hands of police, presidential candidates would know to anticipate and how to handle disruptive protests. Sanders apparently seemed impatient and irritated with the protests, while O’Malley’s repeated “all lives matter” comment prompted a major negative outcry and later an apology from the candidate. “I meant no disrespect,” O’Malley told the digital show, This Week in Blackness.

Neither candidate seemed adequately prepared for the protest. Sanders has to understand that a focus on economic inequality makes many think that he is minimizing issues of race. O’Malley has to understand, especially given previous commentary, that statements of “all lives matter” are seen as glossing over the specifics of black lives and the names of the black men and women. The racial issues afflicting the U.S. right now aren’t simply answered by presenting oneself as a progressive Democrat. While one may not be totally happy with the style and substance of the protest in Phoenix, neither Sanders nor O’Malley seems to have been ready to deal with it.

One last issue is the impact on Netroots Nation. In the past, in its DailyKos era, a candidate like Hillary Clinton might not have passed up the presidential forum in the year before the general election. This time, not only was Hillary Clinton unavailable to attend, but the protest might make other candidates a bit wary of future participation. In the past, there have been protests, such as the DREAMers’ disruption of a presentation by Vice President Joe Biden, but generally after making their statement, the protesters let the programs continue. In this case, the protesters took over the program and the Netroots Nation moderator, Jose Antonio Vargas, didn’t appear to know what to do. For people who might have wanted Vargas, an experienced journalist and interviewer, to elicit policy specifics from the two candidates, the opportunity was lost. Making the best it could out of the situation, Netroots Nation issued the following statement:

“Netroots Nation stands in solidarity with all people seeking human rights. With today’s Town Hall, our aim was to give presidential candidates a chance to respond to the issues facing the many diverse communities represented here.

“Although we wish the candidates had more time to respond to the issues, what happened today is reflective of an urgent moment that America is facing today.

“In 2016, we’re heading to St. Louis. We plan to work with activists there just as we did in Phoenix with local leaders, including the #BlackLivesMatter movement, to amplify issues like racial profiling and police brutality in a major way.”