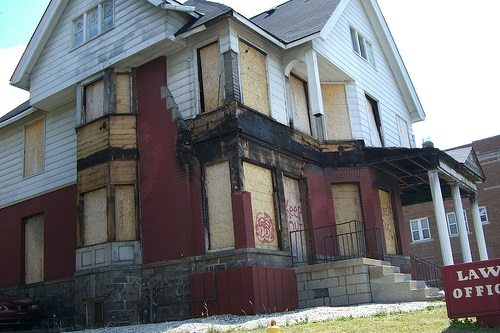 NPQ has been writing a lot lately about public art, but this project has a unique bent that we thought was worth sharing. As readers know, Flint, Michigan, had 5600 abandoned homes in 2013, and residents, community activists, and philanthropy have been working hard to revitalize that devastated community. As some may know, Flint is home to the C.S. Mott Foundation, which has a commitment to that area.

Today, the Flint Public Art Project will host a parade through Flint’s Civic Park neighborhood. Painted in bright colors on the too-many blighted houses will be words like “pause,” “echo,” “past,” “assembly,” and “bouquet.” The parade is one of many designed to celebrate neighborhoods in the economically troubled but revitalizing city of Flint, and they are meant to help restore a feeling of ownership to communities.

“I think it’s a good thing,” said Maurice Davis, president of the Civic Park Neighborhood Association. “I think it’s going to look nice. (The houses) will have a little touch of art. It will look better than blighted houses.”

Melisa Morgan, the lead artist on the project, is a native of Flint but not of this neighborhood. She says she spent a lot of time at community meetings in preparation. Morgan said that more traditional positive words like “hope” and “love” had the potential to be too common to be deeply noticed. “We were trying not to be so moralistic,” she said, “less preachy in a way, and more abstract. But the idea of hope and the idea of love are still present in the words we chose. There are a lot of murals that exist with those words….Words that make you think.”

There will also be bulletin boards on the parade route for residents to write messages and ideas upon.

NPQ would love some photos from this Flint event. Please send them if you have them.—Ruth McCambridge