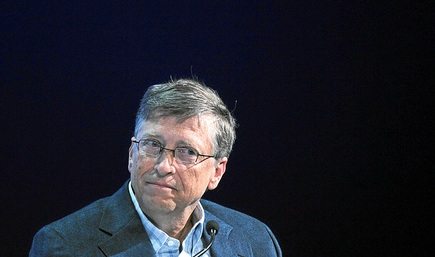 Felix Salmon, the finance blogger at Reuters, has some questions about how philanthropic billionaires calculate their net worth. For example, given that Bill Gates and Warren Buffett have announced huge donations to their foundations and other charities, shouldn’t that have knocked them down from second and third place in Bloomberg’s billionaires index, putting them behind IKEA’s Ingvar Kamprad in fourth place, Oracle’s Larry Ellison in seventh, the two Koch brothers in eighth and ninth places, and Newt Gingrich’s pal Sheldon Adelson of the Las Vegas Sands in eleventh place?

Salmon concludes that Gates and Buffett have pledged to give most of their money away, but haven’t yet done so. Despite his pledge, the actual amount that Buffett has given away so far is about $10.8 billion (132 million shares of his stock), which knocked his net worth down from $55.9 billion to $45.1 billion. If one assumes no change in Bill Gates’s ranking in second place at $63.4 billion, that would still rank Buffett as the third richest person on earth. If one calculates the donations he has committed to make but not yet delivered—another 368 million shares—he would only have $15.2 billion left, enough to keep ranking him in the world’s top 50 billionaires.

Gates has donated $28 billion to the Bill & Melinda Gates Foundation so far. If he hadn’t, his net worth would have been $91.4 billion instead of his current $63.6 billion, ranking him ahead of Mexico’s Carlos Slim as the absolute richest human living. Unlike Buffett, whose pledge of future donations is quite specific, Salmon says that Bill and Melinda Gates only said in their giving pledge letter that they “have committed the vast majority of our assets” to their foundation. Salmon says he could find nothing more specific in their commitment statements.

Because we don’t know how much of the wealth of the others billionaires on the list has been pledged or actually donated to charity, or whether some of these billionaires consider the money in their tax-exempt foundations theirs, Salmon suggests that the billionaires table should “use the sum of current net worth and the amount that has been given to charity” to figure out how the billionaires stack up against each other. In that way, a highly competitive version of Buffett, for example, wouldn’t have to face the shock of his ranking dropping to 46th, between a couple of Russian billionaires.

Salmon concludes that lists like the Bloomberg billionaires index are kind of silly. On the other hand, there is a use to lists like this one, which features among the 20 richest people in the world five Walton family members, the two Koch brothers, two billionaires from India (where 75 percent of the population lives on less than $2 a day and more than 25 percent is below the international poverty level of $1.25 a day), and the world’s richest man hailing from Mexico, where 18 percent of people live in extreme poverty. It’s a good reminder of how unbelievably extreme the economic gaps are in our world.—Rick Cohen