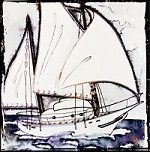 Veterans for Peace are in a dispute with the Maritime Museum of San Diego after the museum refused a request to have the historic peace-seeking Golden Rule dock at its wharf as a temporary exhibit.

The Golden Rule, a 30-foot ketch, became famous for its attempt to sail to the Marshall Islands in 1958 to try to halt atmospheric nuclear weapons tests that were wreaking havoc on the environment and the health of local people. The crew was, at that time, willing to sacrifice both the boat and themselves in their mission. Made up of Quakers and pacifists, the crew was arrested en route twice, but the attempt was well publicized and surfaced outrage that helped lead to the Partial Test Ban Treaty.

With that hard-won success, the voyage served as a model for Greenpeace, which it directly inspired, as well as other activists. The boat, however, was sold and eventually fell into disrepair, ending up in Humboldt Bay where it finally sank in 2010. It was just re-launched in Humboldt last Saturday as a “living museum and floating classroom” after four years of loving restoration paid for by Veterans for Peace.

Veterans for Peace wants to dock the boat in San Diego in a place of honor in time for its annual conference. Museum spokesman Vincent Hernandez said the museum issued the refusal because of the ship’s political agenda, but Hernandez appears to be confused about whether the refusal is based on the specific agenda, which he describes as “promoting civil disobedience,” or based on the fact that it has any political advocacy agenda whatsoever, which he mistakenly believes is not allowed under nonprofit tax status.

Hernandez has said that the simple fact that the Golden Rule’s political agenda was active and current could endanger the museum’s tax-exempt status. “The vessel still has an active political agenda,” Hernandez said. “If we help promote a vessel with a political agenda, that goes against our mission and it could affect our nonprofit status.”

This is, of course, nonsense, as VFP President Barry Ladendorf was quick to point out. “We do not support political candidates, nor do we contribute to any political party. Locally, our chapter is part of the San Diego Veterans Council that supports veterans,” Ladendorf said. “I do not possibly see how the museum’s nonprofit status would in any way be endangered by working with another nonprofit organization with similar missions of preserving historic maritime history of the Pacific.”

We hope the museum understands the folly of its ways. Taking this position does not provide a great deal of confidence in its ability to portray maritime history accurately.—Ruth McCambridge