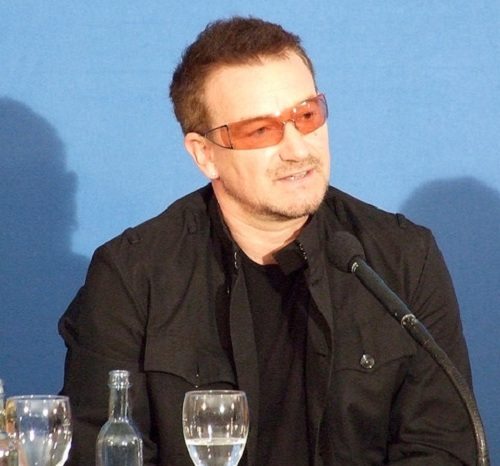 The big news from the Clinton Global Initiative seems to have been U2’s Bono doing a spot-on impersonation of Bill Clinton, filling time as Clinton was late showing up for a panel. The good-humored Clinton responded later in the event by imitating the Irish rocker. CNBC has made videos of both impersonations.

In the world of international aid, celebrities such as Bono and others play outsized roles, and effective politicians and fundraisers like philanthropist Clinton know how to tap their fundraising prowess. Nonetheless, wealthy celebrities sometimes pursue strategies in their own economic interests that seemingly conflict with their international aid policies.

Bono has been taking it on the chin for a while since it was revealed that his band, U2, had moved its business to the Netherlands because of Holland’s low tax rates, even though Bono advocates that countries increase their aid to Africa—“if need be, by paying more taxes,” according to the Independent. In a talk to the Clinton Global Initiative, despite his band’s move to Holland, Bono defended Ireland’s efforts to reduce its tax rates, explaining that “tax competitiveness has taken our country out of poverty…Tax competitiveness is why Ireland has stayed afloat.” He further defended the Taoiseach (prime minister) of Ireland’s rejection of Germany’s demand that Ireland raise its taxes in return for a financial bailout.

To his credit, although U2 is paying its business taxes in the Netherlands, Bono pays his personal taxes in Ireland, choosing not to become a personal tax exile. But contrast Bono’s statements about tax competitiveness with Hillary Clinton’s speech at the Clinton Global Initiative, where she very clearly called for raising the tax rates of the rich—everywhere. “It is a fact that the elites in every country are making money,” the likely 2016 presidential candidate said. “There are rich people everywhere, and yet they do not contribute to the growth of their own countries.” According to CNBC’s John Carney, the former secretary of state explained “growth of their countries” as investments in schools and hospitals, not, as implied in Bono’s statements about Ireland, the domestic business investment climate.

This year’s Clinton Global Initiative, however, seemed to contain a surfeit of powerful defenses of the prowess of capitalism, issued by capitalists of somewhat deeper pockets than the Irish rocker. On a panel moderated by CNN’s Fareed Zakaria, Goldman Sachs CEO Lloyd Blankfein was more than feisty: “I would say to Occupy Wall Street that business has helped lift more people out of poverty than philanthropy,” Blankfein said. “We should educate the public more about how business and its core activities have lifted people out of poverty.” The Goldman CEO gave a nod to philanthropy, saying that it could “fill the gaps” and be “supplementary,” but the challenge of pulling people out of poverty would be achieved by business, not charity and philanthropy.

With different language and different qualifiers, Blankfein was only repeating what Bono said earlier in the week to the Guardian: “My father was Labour, classic Dublin Northside household. And I still carry that with me. And though I believe that capitalism has been the most effective ideology we have known in taking people out of extreme poverty, I don’t think it is the only thing that can do it, and in some ways I wish it wasn’t.” He further explained his RED initiative’s connection to the corporate sector: “I know a lot of your readers might think corporations are inherently bad things. I have to say I really don’t.”

Blankfein and Bono had pro-corporate company among the CGI speakers, including Bill Gates, who decried “nonprofits think[ing] for-profits are evil,” though they were countered by Mo Ibrahim of the Mo Ibrahim Foundation. “For every corrupt leader, there are 50 corrupt business people,” Ibrahim said to the CGI audience. “Half of them are sitting here.” Nonetheless, Ibrahim was a minority dissenter amidst the celebration of the positive impact of business in society.

Bono might have gotten press for his impersonation of Clinton, but he seems to have the message of Blankfein down pretty good as well.—Rick Cohen