Boston Philanthropy Gets Down and Dirty on Yawkey Way Takedown

In Boston, the name of late former Red Sox owner Tom Yawkey will be removed from the city street leading into Fenway Park. Yawkey ran what was once the most segregated franchise in baseball—the very last to integrate.

The Boston Public Improvement Commission isn’t saying much about what was behind their final decision, which was hotly contested in the city, but as this report in the Boston Globe asserts, it forges a permanent and “unbreakable link between the Yawkey name and the allegations of racism that trailed him.”

The Yawkey Foundations, a mainstay funder of many local nonprofits, immediately objected to the decision on the grounds that the narrative of Yawkey’s racism was inaccurate:

As we have said throughout this process, the effort to expunge Tom Yawkey’s name has been based on a false narrative about his life and his historic 43-year ownership of the Red Sox. The drastic step of renaming the street, now officially sanctioned by the City of Boston…will unfortunately give lasting credence to that narrative and unfairly tarnish his name, despite his unparalleled record of transforming the Red Sox and Fenway Park and supporting the city he loved through his philanthropy.

In fact, it was the Red Sox organization itself, currently led by John Henry, that requested the street’s name be changed to Jersey Street in February because the history of racism at the park needed to be affirmatively disavowed. The legacy was undeniable, they argued. From the players to the front office, the organization remained all-white well after African American stars entered the Major Leagues.

The Red Sox organization called the name change “an important step in our ongoing effort to make Fenway Park a place where everyone feels welcome. We recognize we have a long way to go, but remain committed to building a spirit of diversity, inclusivity, and openness within our front office and our ballpark.”

But the foundation certainly has its supporters, as Globe columnist Adrian Walker wrote in a column where he featured the defense played by one Black community leader associated with six charities receiving money from the Yawkey Foundations. We have discussed this particular relationship before in a newswire last year, entitled “Boston Globe Finds Insider Baseball at Yawkey Foundation.”

Walker concedes that “the Yawkeys have a serious philanthropic legacy in this town” and “naming a city street after such a retrograde on race sends a message, and a message like that matters. It serves to reinforce this city’s terrible, and largely deserved, reputation for not caring about a history of bigotry.” However, he states that the position that many, including the mayor, have taken, is a safe one; such symbolic acts, he argues, count for nothing and we should set to the more serious real work of eliminating racism through dialogue.

Heavyweight philanthropist-about-town Jack Connors also sided with the foundations; the Connors Family Office ran a full-page, two-column ad in the Globe listing local community nonprofits which have received grants from the Yawkey Foundations. Across the top in heavy headlining, it reads, “Giveth. Taketh?” That recounting, said State Representative Russell Holmes, whose district includes many of Boston’s black communities, could be interpreted as a threat. “It sends really a message of old school politics; it really sends a message of arrogance; it really sends a message around what I would say is white privilege in the city,” he said Thursday. “‘You should shut up.’ That’s how I hear it, that’s how I see it, that’s how I read it.”

Meanwhile, although the local subway station will also be renamed, what will happen to all those nonprofit buildings bearing the Yawkey name?—Ruth McCambridge 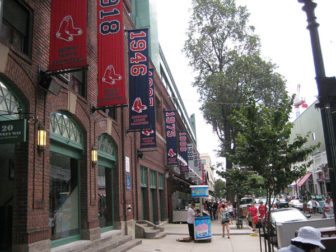