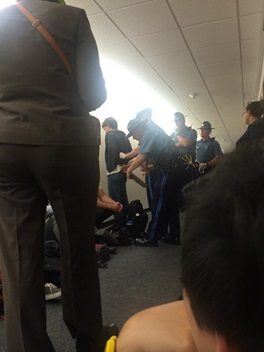 Boston is a very expensive city in which to live, and that means people with less income get pushed out of neighborhoods that are more central to the city. Lucky that Boston has a great public transportation system, you might say, but it is at a price that many making lower wages struggle to afford. And when it comes to young people, they may be living in a cultural Mecca, but how do you travel to work and school, never mind to all that richness?

Twenty-one young people associated with this coalition were arrested on Monday in Boston as they protested for a reduced-price youth pass for public transportation. Around 30 members of the Coalition participated in a sit-in outside of Secretary of Transportation Richard A. Davey’s office at the Transportation Building in Boston—staying after the offices had closed for the day—demanding that the city provide a $10 unrestricted monthly MBTA pass for people ages 12 to 21.

Despite arresting most of the protestors, transportation officials issued a statement assuring that “MassDOT & the MBTA have expressed a willingness to continue to work with advocates to find ways to make public transportation more accessible and affordable.” We are not sure what that means.

Secretary Davey wrote in a letter to the coalition that implementing the group’s request, even as a pilot involving just 2,500 people, would cost $1.95 million, “not including the additional costs for eligibility determination and distribution.” But the group disagrees with that estimate, countering with an assertion that young people spend under $30 a month on the T.—Ruth McCambridge