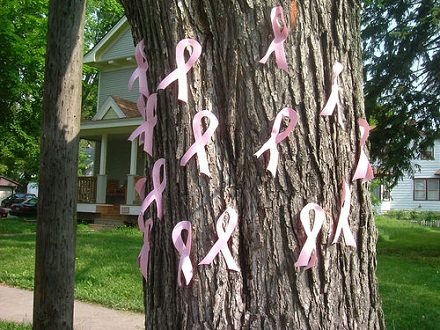 Everyone is seeing pink ribbons just about anywhere you look because October is Breast Cancer Awareness Month. According to Breast Cancer Action Montreal (BCAM), the pink ribbon campaign is based on five “little pink lies:” “that a cure is just around the corner, that breast cancer rates are decreasing, that a pink ribbon means the company gives substantial funds toward prevention, that governments protect us from carcinogens in consumer products, and that evidence that cancer is caused by environmental factors is slim.” The president of BCAM, Patricia Kearns, says that the pink ribbon campaign stops people from being active on the underlying issues behind breast cancer “because if you join a run or buy a pink product, you feel like you have contributed to this tidal wave of money that will cure breast cancer.” She concludes, “I think we are being duped.”

According to Kearns, corporations participating in the pink ribbon campaigns aren’t completely forthcoming about how much of their pink ribbon product sales actually go toward cancer causes and which organizations benefit. Also, she says that companies sometimes attach pink ribbons to products with cancer-causing ingredients, such as lipstick containing lead or soup sold in cans with bisphenol-A. BCAM’s executive director, Rosanne Cohen, adds, “It’s just about marketing and merchandise.”

As NPQ readers know, this kind of critique has long been made in regards to some cause-related marketing campaigns where it is unclear whether the nonprofits or the corporate sponsors are benefitting more (for more, see this article on the business rationale of cause-related marketing and bottom-line benefits from Triple Pundit, this British report on brand benefits, and this report on cause-related public relations). Over the years, state attorneys general have gingerly criticized some cause-related marketing, including a now dated but still powerful report on nonprofit product marketing, “What’s in a Nonprofit’s Name: Public Trust, Profit, and the Potential for Public Deception,” and more recently, the 2011 investigation of New York State Attorney General Eric Schneiderman into charities taking advantage of the pink ribbon campaign month.

A representative of the Canadian Cancer Society (CCS), which receives funding from companies participating in the pink ribbon campaign, responded to the BCAM criticism with some agreement and some disagreement. “For sure there are some products and some campaigns associated with the pink ribbons (that are questionable), and perhaps there is too much pink everywhere,” the CCS’s André Beaulieu told the Gazette. “But is it wrong to make women aware that breast cancer can affect them? Is it wrong if it makes some women talk to their doctor about their personal risk and maybe get tested?”

Beaulieu concludes, “(F)or us, it is not just about the donations; the campaign is all about awareness and education and publicity.” All well and good, except that is the same argument used by some telemarketing fundraisers who deliver relatively little of their take to the charities they represent, but defend their practices as also meant to generate awareness and to educate the public. Like BCAM, CCS does support better labeling of products for the carcinogens they may contain and better reporting from participating pink ribbon companies regarding how much of their pink ribbon sales actually go to cancer charities, but the deeper questions behind cause-related marketing remain. In cause-related marketing, it’s hard to imagine that the benefits are always and automatically completely equal between the cause and the corporation. Sometimes, in a win-win situation, one party wins more than the other.—Rick Cohen