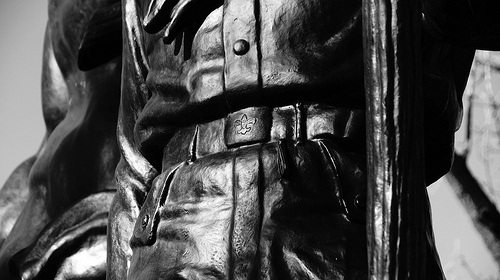 The Hacker Scouts describe themselves as “a nonprofit, inclusive organization dedicated to addressing the needs of the global maker community through STEAM (science, technology, engineering, art, and math) education and skill building.” Founded in 2012 by Oakland, California resident Samantha Matalone Cook, it operates as a program of the 501(c)(3) School Factory, Inc.

The Hacker Scouts were contacted by the Boy Scouts of America in May, and despite a series of correspondence, have not been able to come to a resolution regarding the use of “Scouts” in the group’s name. The BSA says that, due to a special charter from the U.S. Congress dating back to 1916, they have the “exclusive right to use emblems, badges, descriptive or designating marks, and words or phrases” that it adopts. (Groups such as the Red Cross and Little League Baseball have similar protection.) This seeming exception to trademark law has been upheld in the courts, which prompted the Hackers to say that the charter “may be unconstitutional” in their release.

In a statement, Boy Scouts public relations director Deron Smith said the organization “has a responsibility” to its members to maintain “trademarks, symbols, words and phrases” that create “a sense of belonging,” and that “as any organization would do, from time to time, it’s necessary for the BSA to take steps to protect its intellectual property and brand.…The BSA plans to continue corresponding with this organization in hopes of reaching an amicable resolution.”

For their part, the Hacker Scouts are still mulling their decision with advice from their lawyers. However, it’s clear that being rigid about others using words like “scouts” that are obviously in the public domain doesn’t do the BSA any favors, especially considering their considerable public relations strife. One commenter on the article suggested that they take the name, “The Non-Homophobic Scouts. No chance of confusion in the market.”—Jason Schneiderman