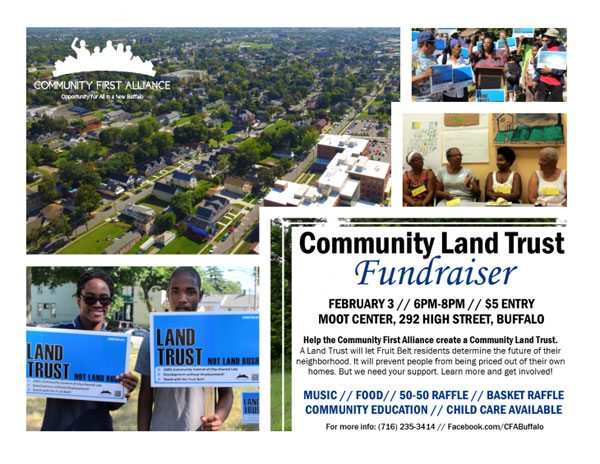 It is the product of more than a decade of community organizing, but residents in east Buffalo’s historic Fruit Belt neighborhood cheered when Common Council President Darius Pridgen announced on his radio program last Friday that the “City administration [will start] setting aside land…for the first land trust in the Fruit Belt.”

As WGRZ reports, “The folks who live in the Fruit Belt neighborhood, east of the thriving Buffalo Niagara Medical Campus, worry that soaring property values are forcing people out who can’t afford to pay increased rent or property taxes.” The land trust provides an avenue to protect residents by creating a nonprofit, governed by a community board, that holds title to the land and provides affordable housing to residents.

A 2016 policy brief from the nonprofit Partnership for the Public Good made the business case for the community land trust, which helped spur city action. The study estimates that “53 percent of residents spent over 30 percent of their income on housing” in a neighborhood where, as of 2014, poverty remains a high 42 percent. The city holds title to more than 200 vacant lots in the neighborhood—vacant lots that, if transferred to the community land trust, could help existing residents remain in the community and reduce their housing cost burdens. Pridgen’s announcement means that at least some of these 200 lots will be transferred to the trust.

Effectively, the land trust provides housing that serves as an intermediate rung between renting and owning. The stewardship of the community-based nonprofit also allows for residents to guide long-term planning. Another benefit of this structure is that the below-market prices help ensure that the land trust homebuyer does not get overextended, which is one reason why foreclosure rates on land trust homes are dramatically lower—about one eighth as high—than market-rate homes.

As we have covered in NPQ, the idea of a community land trust—first used in the US as a mechanism to protect rural lands for Black farmers in the late 1960s in Albany, Georgia—has gained ground as a tool for cities seeking to preserve housing affordability for low-income residents as wealthier, often whiter, residents move in, frequently pushing residents of color out into suburban areas—reversing what had been the opposite pattern of previous decades.

Buffalo joins a growing number of cities that are pursuing land trust solutions. Others acting in the past year include Washington, D.C., New York City, Pittsburgh, and Baltimore.

The Fruit Belt itself provides “a classic tale of how urban policies have destabilized the African American community and robbed low to moderate‐income blacks of the wealth producing power of homeownership,” notes Henry Louis Taylor, Jr., an urban studies professor and director of the Center for Urban Studies of the University at Buffalo. The Fruit Belt was originally German, but, starting in the 1950s, white flight and Black in-migration changed that dramatically.

Two interactive factors triggered black migration to the Fruit Belt…. First, the building of the Kensington Expressway in 1960 split the Fruit Belt and separated most of it from the lower East Side and devalued property.… Second, during the 1950s, a massive urban renewal project on the lower East Side destroyed about 30 city blocks and decimated the historic center of Black Buffalo. Many of those displaced…settled in the Fruit Belt.

The number of Blacks peaked at 9,125 in 1970, but neighborhood population would fall by more than two thirds by 2000. (As of 2013, the neighborhood had 2,670 residents, 83 percent of whom are Black). As Taylor details, “Between 1970 and 2000, the proportion of Fruit Belt residents living in poverty increased from 28 percent to 45 percent.” A key factor behind neighborhood decline, Taylor adds, was city-backed housing demolition that pushed residents out to facilitate the expansion of the Buffalo Niagara Medical Campus (BNMC).

Ironically, now BNMC is driving a revival that threatens to displace residents again, only this time through rising prices. Lott notes that current “rents in the Fruit Belt are $1,400 in some places…much too high for individuals for low income and poor people to be able to afford.”

The community land trust that Lott participates in is part of a broader effort to make sure that as the Fruit Belt neighborhood rebounds, a new wave of resident displacement is prevented. Involving a dozen local neighborhood groups and known as the Community First Alliance, the land trust is part of a broader strategy that includes support for local business development and the development of work pipelines to help residents obtain jobs at BNMC.—Steve Dubb