Burning Man Transforms into Nonprofit with Plans to Expand 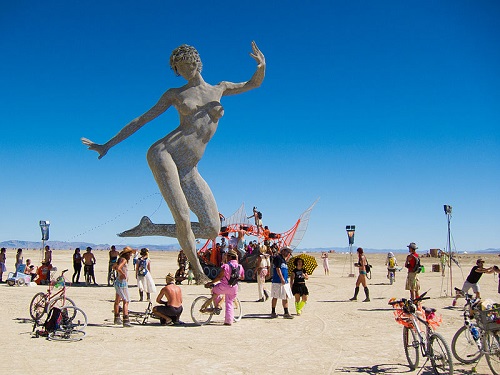 Tickets for Burning Man sold out in record time this year, with all 38,000 general admission tickets priced at $380 sold in just 44 minutes. Burning Man is an experimental community that creates a weeklong annual event, transforming the Nevada desert into a vibrant city of oddities with a leave-no-trace ethic for its environment. The event has a culture based on ten principles that were codified ten years ago (but were present in some form at its inception), and many members of the community continue to share and integrate Burning Man principles into their lives thereafter.

On their Burning Man Blog, the Burning Man Project announced officially that in January, they achieved their milestone goal of nonprofit status. The organization originated as a Limited Liability Company, Black Rock City LLC, but as the announcement explains, “an LLC is not designed to meet the needs of our growing culture and it wouldn’t survive beyond the founders’ lifetime. Our mission has always been to serve the community, and a nonprofit public benefit corporation is the most socially responsible option to ensure and protect the future of Burning Man.”

As a nonprofit, the organization will strive to spread the culture and values upheld by the Burning Man community. It aims to stimulate programs linked to civic engagement, education and the arts. The organization has always been heavily volunteer-driven, but members of the community also argue that its for-profit form won’t be changing drastically.

The group has already shown its philanthropic roots by leading such initiatives as YES Spacecraft and The Black Rock Arts Foundation, as well as through collaborating with Zappos founder Tony Hsieh to help transform downtown Las Vegas into a hub of arts and innovation.

The project clearly has plans to expand globally, and with tickets near impossible to obtain in recent years, this move makes logical sense. Founder Larry Harvey was quoted in the blog, “After 24 years of tending our garden in the desert, we now have the means to cultivate its culture worldwide.” So where will the Burning Man community expand events to next?—Aine Creedon