BU’s State Racism Index: The Results Might Surprise You 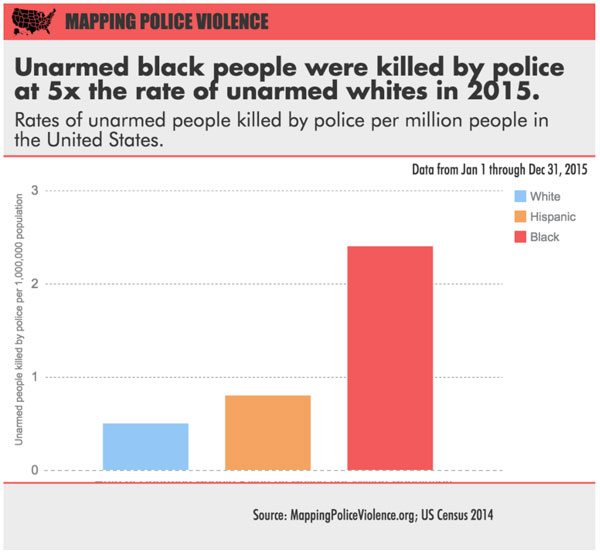 Which states have the dubious distinction of having the highest levels of structural racism? If you named any of the states below the Mason-Dixon line, you’d be wrong. Researchers at Boston University’s School of Public Health, who set out to understand the racial dynamics of police shootings, developed a novel picture of how our nation has progressed in its efforts to erase the legacy of slavery and Jim Crow. Their findings on the shootings by white police officers of unarmed blacks illustrates clearly why this portrait has a wider meaning.

According to NPR’s Gene Denby, to understand the racial dimension of police shootings, the BU researchers created a metric called the “state racism index.”

It took state-level data on black-white residential segregation, as well as disparities in educational attainment, employment status, economic status, and incarceration status, and scored each of these variables. Those scores were then tabulated into a number on a zero to 100 scale; the higher the number, the more pronounced the structural racism in a state.

The national portrait that emerges is not what one might expect. Wisconsin topped the researchers’ list with a rating of 74.9, followed by Minnesota (70.0), New Jersey (68.5), Illinois (67.8), and Connecticut (63.9). (For comparison, the lowest score belonged to Montana, at 25.9, followed by Hawaii, Kentucky, New Hampshire, and Nevada, which all had scores below 35.) Speaking to NPR, Dr. Michael Siegel, professor of community health sciences and a coauthor of the study, said “Traditionally, we’re taught that racism is [most visible] in the South, but we’re seeing here that it’s the Midwest and the Northeast.”

Slavery in Southern states created a violently enforced caste system that, according to Gerson, “paradoxically, brought black and white Southerners into fraught social and geographic proximity.” On the other hand, the Great Migration of Black southerners to the north in the early part of the 20th century, motivated by growing industrialization, found them settling into “racially and economically isolated neighborhoods and ghettos. That separation was maintained through insidious housing policies like redlining. While the legal underpinnings of segregation in the South were formally, if not practically, overturned by the courts, the ways cities in the North and Midwest maintain segregation are enduring and hard to see. That means major metro areas outside of the South are among the nation’s most diverse and most deeply partitioned.”

When the BU researchers used this perspective to study police shootings, they showed the importance of understanding the reality of our nation. The higher the level of racism in a state, the higher the incidence of white police shootings of unarmed blacks; “for every 10 point increase in the state racial segregation index, there was a 67 percent increase in the state’s ratio of police shootings of unarmed Black victims to unarmed White victims.” From Dr. Siegel’s perspective, “the problem of police killings of unarmed Black victims should not be viewed merely as a problem of flawed action on the part of individual police officers, but more because of the broader problem of structural racism. Unjustified homicide by police should be added to the long list of the public health consequences of societal racism.”

For policymakers at all levels, it’s that long list that must be of concern. In describing the impact of this work, Dr. Siegel saw it as changing the focus from individual behavior to structural challenges: “Our study suggests that this problem is not simply about the actions of individuals, but about the actions of all of society. Hopefully, reframing this from an individual to a societal problem will pave the way for a meaningful discussion about institutional racism.” We should not limit our concern to quality policing and efforts to make it race-neutral. Education, healthcare, housing, and environmental policies may each look different when viewed through the BU researchers’ lens. Seeing the problem as one of “bad apples” makes responses easier but risks missing real solutions.—Martin Levine