C-Section Trends Out of Control in South Florida 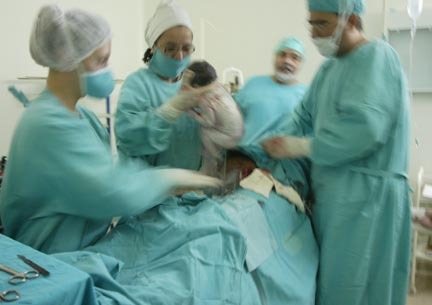 On Labor Day, parents from the United States, Canada, Mexico, and Australia rallied to advocate for safer birth practices and increased information and choice about birthing, including reduced use of Cesarean section deliveries, or C-sections.

The American College of Obstetricians and Gynecologists also has concerns about the rapidly increasing number of C-sections in the United States. The procedure is a major abdominal surgery and costs approximately twice as much as a vaginal birth, but increased use of the procedure does not appear to be improving outcomes for women or their babies – in fact, it is associated with surgical complications, increased rates of maternal rehospitalizations, and increased complications requiring neonatal intensive care unit admissions. Internationally, the ideal rate of C-sections is considered to be 10 – 15 percent of all births, yet use of the procedure in the United States increased between 1996 and 2007 by 50 percent, accounting for 32 percent of all births in 2007. Now, in Hialeah, Florida, the rate is more than twice that, at 68 percent.

The Leapfrog Group, a nonprofit that surveys U.S. hospitals for quality and safety measures, issued a report last week based on self-reported hospital data on the number of C-sections performed on first-time, low-risk moms with single babies who have reached their 37th week and where the baby is positioned head-down, indicating a low-risk of complication. Leapfrog’s data were designed to help expectant parents choose a hospital for their childbirth, said Leah Binder, chief executive of the group. But, Binder also hopes that this will induce hospitals to cut down rates of C-sections.

“What we see from this data,” she said, “is that not all hospitals are the same, and the likelihood of needing a C-section is actually different depending on which hospital you choose….Because we see so much variation, we know hospitals need to set their sights on reducing rates.”

This report is especially negative for Florida hospitals. Their data far exceeded the recommended target of 24 percent out of 100 births. In fact, some hospitals reported ratios that were greater than 50 percent. Baptist South Miami reported a ratio of 53.4 percent, Hialeah at 68 percent, Palmetto General, 57 percent, Kendall Regional, 53.9 percent, Mercy Hospital, 51.8 percent, Plantation General, 54.7 percent. It should be noted, though, that the data have limitations, as Leapfrog exclude from the survey some hospitals that could have reported C-section rates.

Critics suggest that hospitals have an incentive to perform operations. According to a 2013 study by Truven Health Analytics, a healthcare consultant, average total payments for cesarean section deliveries were about 50 percent higher than average payments with vaginal births for both private insurance—$27,866 vs. $18,329—and Medicaid, $13,590 vs. $9,131. Childbirth Connection, a nonprofit group advocating informed choice concerning vaginal births, contends, “Many health professionals are feeling squeezed by tightened payments for services and increasing practice expenses. Some payment schedules pay more for cesarean than vaginal birth. Even when payment is similar for both, a planned cesarean section is an especially efficient way for professionals to organize their hospital and office work. Average hospital payments are much greater for cesarean than vaginal birth, and may offer hospitals greater scope for profit.”

Childbirth Connection’s “Listening to Mothers” survey indicated that many women with a previous cesarean would have liked the option of a vaginal birth after cesarean but were not informed by health professionals and/or hospitals. About nine out of ten women with a previous cesarean section are having repeat cesareans in the United States. Similarly, few women with a fetus in a breech position have the option to plan a vaginal birth, and twins are increasingly born via planned cesarean section.

The organization also suggests that doctors are prioritizing their own scheduling needs above the best interests of mothers and babies.—G. Meredith Betz