Can California Adjust to Good News and Shift Spending from Jails to Schools? 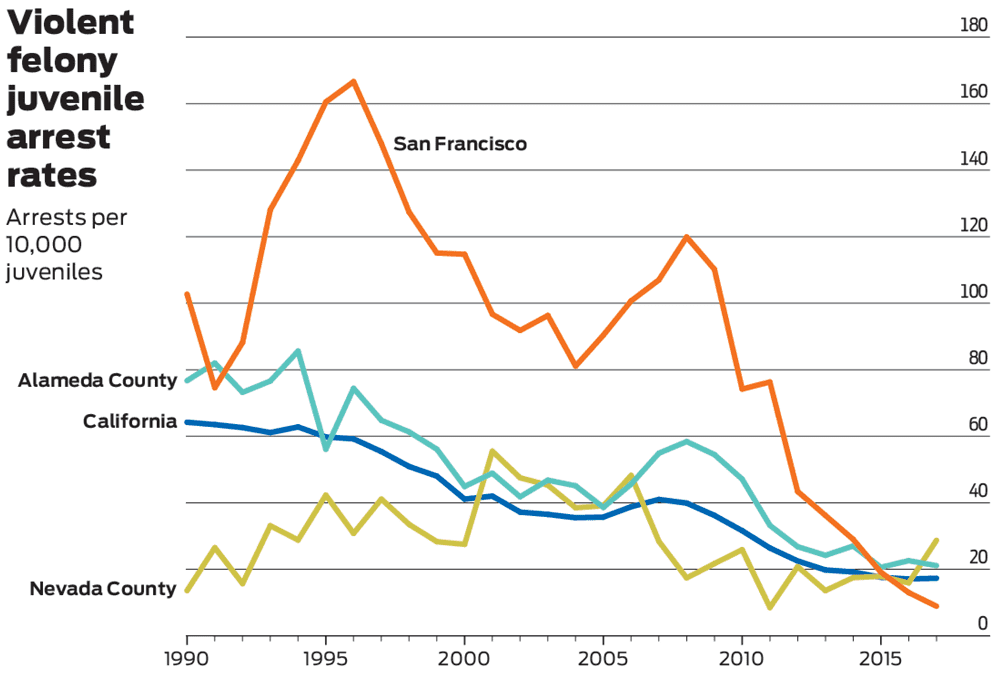 The result: “Some California counties are spending $1,400 a day to incarcerate each juvenile, or $500,000 annually, up from $400 a day or $150,000 annually just eight years ago.” Not surprisingly, given recent teacher strikes in Los Angeles and Oakland, Tucker and Palomino make the direct link to education, pointing out that, “By comparison, the state spends roughly $11,500 a year to educate each K-12 student.” California current enrolls 6.2 million children in its public schools. If the $15 billion going to juvenile justice could be cut in half to reflect the reduced arrest levels, that would free up an additional $1,200 in per-pupil funding, more than a 10-percent increase.

San Francisco’s district attorney George Gascón laments that it can be hard to convince the public and politicians that things are better. “Our jails are not full,” Gascón tells Tucker and Palomino, “but people think maybe someday they will be.”

In human terms, Tucker and Palomino point out that the “downward trend in violent crime has resulted in 4,700 fewer juveniles slain in California during the past two-and-a-half decades; 150,000 fewer arrests for rapes, assaults and other violent crimes that didn’t happen; and hundreds of thousands of youths not booked into juvenile hall.”

Many factors are floated to explain why crime has fallen. Among those cited are declining lead exposure as a generation grew up without constant exposure to leaded gasoline and leaded paint, the rise of community policing, and better education. (Contrary to the narrative of failing schools, the US high school graduation rate reached a record high of 85 percent in 2017.)

Mike Males, a senior research fellow with the Center on Juvenile and Criminal Justice in San Francisco, which advocates for alternatives to incarceration, notes, however, that nobody truly knows why the drop in crime rate occurred. Males tells Tucker and Palomino that crime fell “almost regardless of what local, state or national policies were adopted.”

Ironically, juvenile halls expanded as the crime rate fell. “At least 41 of the state’s 58 counties expanded or built new juvenile halls between 1996 and 2007,” Tucker and Palomino explain. Now, “due to the declining crime and a growing emphasis on alternatives to incarceration…in 39 of the 43 California counties that have juvenile halls, the facilities were less than half full in 2018. Some were nearly vacant.”

Tucker and Palomino break those numbers down. “Nevada County,” they report, “had an average of five juveniles locked up each day last year in a facility built to hold 60. Alameda County had 66 kids in a building designed for 358.”

“The falling crime rate, particularly among youths,” note Tucker and Palladino, “raises larger questions about societal priorities and long-term impacts.” In Oakland, for instance, 18 youth were slain in 2006, but only one in 2017.

“We could get to a point where we achieve our mission of ending violence in Oakland,” says Anne Marks, executive director of Youth Alive. “You could picture how it could happen.” Because fewer teens and young adults are getting into trouble, the group has expanded its violence prevention efforts to include those under 35.

Criminologist Jay Albanese, a professor at Virginia Commonwealth University, sees the potential, noting that instead of spending billions on criminal justice, money could go to housing, health care, employment training, and education.

Some states are taking action. New Jersey, Tucker and Palladino note, “has closed scores of youth prisons. In Arizona, there’s an ongoing push by the state’s chief justice to consider turning old, mostly empty juvenile halls into teen recreation centers and other facilities.”

In California, “Since the 1990s, youth held in state-run youth prisons has plummeted, from 10,000 to about 650,” Tucker and Palladino explain. A so-called “realignment law” has redirected most young people who need to be detained into county-run juvenile halls.

But, Albanese cautions, politicians often “find ways to fill the prisons,” with the current effort to detain more undocumented immigrants being a case in point. “I’m worried about whether that vacuum gets filled with another crime problem, real or imagined.”—Steve Dubb