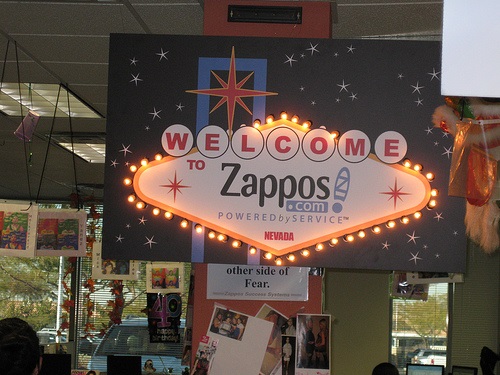 For anyone who is a fan of participatory management, chaotic thinking, etc., this new experiment in the corporate sector will seem like another step in what has been a twenty-five year journey to replace the industrial model hierarchy with something more suited to the twenty-first century workplace. We’d love to hear what you think about this.

Zappos, the online retail outlet, is notable from the outside for outstanding customer service that leaves the buyer with the sense of being listened to while at the same time being served with enormous efficiency. Now, CEO Tony Hsieh has plans to transform Zappos through implementing a “self-governing” operating system with no job titles and no managers.

The system is called a “holacracy” based on the Greek word holon—a whole that’s part of a greater whole. The “holarchy” will distribute power more evenly among the corporation’s 1500 employees, and organization will be done through 400 different circles in which employees can have any number of roles. All of this is aided by and aimed at producing “radical transparency,” and Hsieh believes that it will result in high adaptability, saying, “Darwin said that it’s not the fastest or strongest that survive. It’s the ones most adaptive to change.”

Hsieh is being helped in this venture by Brian Robertson from the management consultancy HolacracyOne. “Zappos’ focus on core values and culture has done a remarkably good job of getting around the limits of a conventional corporate structure,” says Robertson, “Leaders that already understand the limits of conventional structures are the ones that are attracted to holacracy.”

“We’re classically trained to think of ‘work’ in the traditional paradigm,” says John Bunch, who, along with Alexis Gonzales-Black, is leading the transition to holacracy at Zappos. “One of the core principles is people taking personal accountability for their work. It’s not leaderless. There are certainly people who hold a bigger scope of purpose for the organization than others. What it does do is distribute leadership into each role. Everybody is expected to lead and be an entrepreneur in their own roles, and holacracy empowers them to do so.”

John Bunch, who is working to help implement the change, says the system is “politics-free [and] quickly evolving to define and operate the purpose of the organization, responding to market and real-world conditions in real time. It’s creating a structure in which people have flexibility to pursue what they’re passionate about.”

Robertson says that “a high capacity to see the complex systems at play in their organizations,” can aid the success of holocracy. “It’s not linear or a matter of just following the logical argument; it’s seeing the cloud of interconnections and influences, beyond just cause and effect thinking.”—Ruth McCambridge