Can MOVE:DC Revive the Kony 2012 Movement? 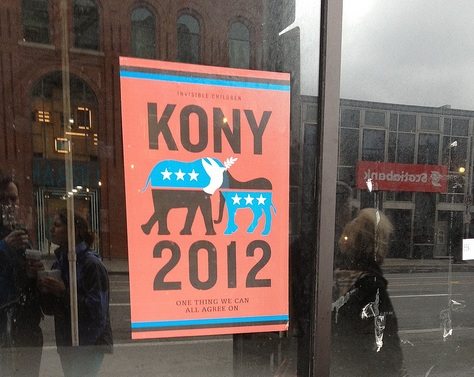 Something is awry in the coverage of this past weekend’s gathering of young people in Washington under the tutelage of Invisible Children. In the continuing effort to rid the world of Joseph Kony, the Ugandan warlord who heads what’s left of his self-styled “Lord’s Resistance Army,” Invisible Children claimed that more than 10,000 people had registered for its MOVE:DC global summit on progress toward that goal, culminating in a march to the White House followed by a dance party at the Washington Convention Center.   We saw lots of tweets from participants and pictures of plenty of t-shirt clad people at the Convention center, but little in the way of mainstream press coverage.

Before the gathering this past weekend, Invisible Children co-founder Jason Russell spoke to a few hundred students at George Washington University in DC’s Foggy Bottom neighborhood and then sat for some questions with the Washington Post. Russell showed candor and humor in discussing “his very public, nude breakdown, which was attributed to brief reactive psychosis near his San Diego home in March” as well as aspects of the IC campaign against Kony.

Russell addressed concerns people have about his organization, “how people thought it was a scam and all the negative energy, comments and criticisms.” He suggested that the organization would eventually “rebuild brand credibility” through face-to-face interactions around the nation, slowly “spread(ing) and change(ing) the cultural temperature of how people feel about Invisible Children.”

Promising the fight against the “slacktivism” that overtakes many political movements, Russell said, “I believe in the work of our Dream Factory [art department] — their ability to be creative again, appropriate and drive the story home until our mission is accomplished.” But what is the mission? To succeed in eliminating Kony, whose army is in tatters someplace between South Sudan and the Central African Republic? Russell admitted to a broader mission: “We see Kony as kind of a preface to something much larger. We have a lot of ideas of where this organization can go, because if we actually capture Kony and become a part of that narrative, we can do a lot more because the youth of the world are uniting around an idea that all human life is valuable… Do we want to start an institution that trains, empowers and educates young people to fight for justice creatively and politically? That would be a dream.”

In the relatively minimal coverage following Invisible Children’s MOVE:DC event, we saw an interesting half-criticism from the Phoenix . On one hand, the writer focused on the dance party, calling it a “rave,” and generally ignoring whatever might have been discussed at the “global summit” earlier in the day. On the other hand, the writer suggested that “Russell’s detractors should see [sic] dude twirl a crowd…[as ] he summoned tears by asking everyone to think about the first time they cried for Kony’s victims.” The writer acknowledged that Russell has “a miraculous hold over his audience.”

Is there something still there in the Invisible Children movement? Or is the Kony 2012 movement so narrowly focused that the mainstream press has deemed it yesterday’s news? –Rick Cohen