Canadian Activists and Celebrities Issue Manifesto for a Green Canada 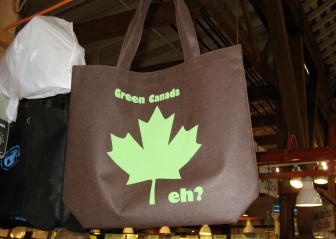 Ever since SCTV introduced Americans to John Candy, Harold Ramis, Eugene Levy, Catherine O’Hara, Rick Moranis, Martin Short, and Andrea Martin, among others, Canada has had a reputation for constant innovation. The latest, in the realm of promoting a sustainable energy economy, is the release of the Leap Manifesto: A Call for a Canada Based on Caring for the Earth and One Another. 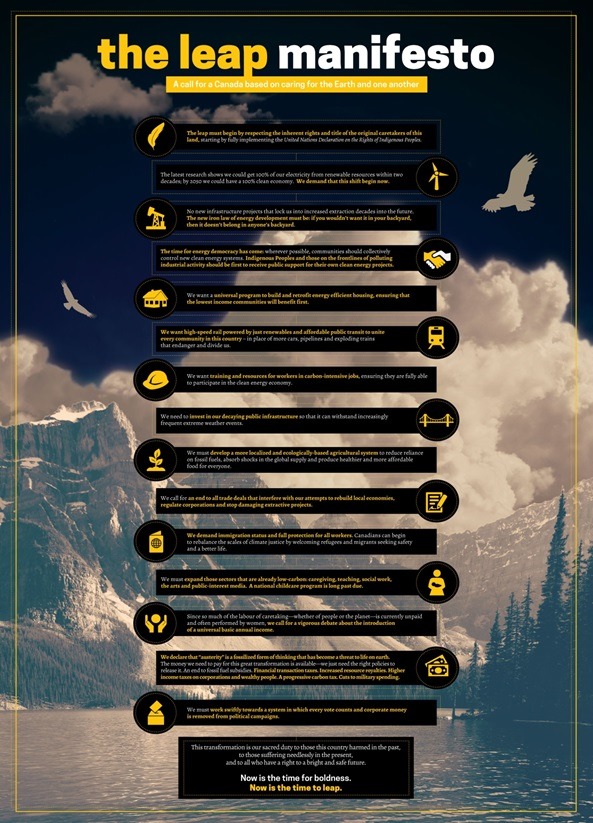 An abridged version of the text of the full Manifesto is on the Common Dreams website with the bylines of Naomi Klein, the brilliant activist who authored No Logo and This Changes Everything: Capitalism vs. the Climate; actress Ellen Page; actor Donald Sutherland; singer/songwriter Leonard Cohen; and environmental scientist David Suzuki. Other initiating signatories of the Manifesto include singer Neil Young, actress Sarah Polley, singer Alanis Morissette, actress Rachel McAdams, actress Pamela Anderson, and author Michael Ondaatje.

The prime mover behind the Manifesto is the indefatigable Klein, who explained why a document ostensibly targeting fossil fuels would be so broad as to include calls for increasing income taxes on corporations and the wealthy and cutting military spending. “Small steps won’t get us there. We have to move on multiple fronts at once,” Klein said. “My crisis isn’t bigger than your crisis. They’re interconnected, they’re overlapping and we can come up with solutions that solve multiple problems at once.”

Noteworthy is that the first clear recommendation of the Manifesto addresses a concern that isn’t explicitly limited to environmental or energy concerns (boldfacing from original text):

This leap must begin by respecting the inherent rights and title of the original caretakers of this land. Indigenous communities have been at the forefront of protecting rivers, coasts, forests and lands from out-of-control industrial activity. We can bolster this role, and reset our relationship, by fully implementing the United Nations Declaration on the Rights of Indigenous Peoples.

Some of the Manifesto is pure common sense, but presented in a way that makes a reader realize the inherent logic: “The new iron law of energy development must be: if you wouldn’t want it in your backyard, then it doesn’t belong in anyone’s backyard.”

As befits a document generated with the touch of Naomi Klein, there is tough content addressing the limitations of the for-profit sector:

As an alternative to the profit-gouging of private companies and the remote bureaucracy of some centralized state ones, we can create innovative ownership structures: democratically run, paying living wages and keeping much-needed revenue in communities. And Indigenous Peoples should be first to receive public support for their own clean energy projects. So should communities currently dealing with heavy health impacts of polluting industrial activity.

After identifying a variety of green energy actions that Canada could and should take, the Manifesto puts the issue into national and international multisectoral contexts:

We call for an end to all trade deals that interfere with our attempts to rebuild local economies, regulate corporations and stop damaging extractive projects. Rebalancing the scales of justice, we should ensure immigration status and full protection for all workers. Recognizing Canada’s contributions to military conflicts and climate change—primary drivers of the global refugee crisis—we must welcome refugees and migrants seeking safety and a better life.

Shifting to an economy in balance with the earth’s limits also means expanding the sectors of our economy that are already low carbon: caregiving, teaching, social work, the arts and public-interest media…Since so much of the labour of caretaking—whether of people or the planet—is currently unpaid, we call for a vigorous debate about the introduction of a universal basic annual income. Pioneered in Manitoba in the 1970’s, this sturdy safety net could help ensure that no one is forced to take work that threatens their children’s tomorrow, just to feed those children today.

We declare that ‘austerity’—which has systematically attacked low-carbon sectors like education and healthcare, while starving public transit and forcing reckless energy privatizations—is a fossilized form of thinking that has become a threat to life on earth.

A logical reaction to this document might be that it is but one of a number of documents that celebrities sign on to, likely to generate little but some positive press for the stars’ social consciousness. Maybe, but the celebs listed as initiating signatories on the Manifesto are well known as far more than endorsers of social-cause-of-the-month efforts. Many are strong and consistent activists in the environmental and political arenas. Plus, the very strong language on the Canadian corporate sector would seem to put the celebrity signatories at odds with some significant political and economic powers in the nation, a difficult position to back down from for these prominent people.

Just as significant is that these activists issued the Manifesto in the midst of a national election campaign, basically standing apart from the major parties to set a standard against which all of them could be judged. Therefore, the Manifesto can’t be seen as a tool serving the purposes of one of the three major political parties (Stephen Harper’s Conservative Party, Justin Trudeau’s Liberal Party, and Tom Mulcair’s New Democratic Party), especially since the recommendations of the document on trade and some energy issues are even to the left of the recently moderating NDP’ers. These activists have laid down a challenge to the dominant political parties, which it would seem all of them fail to meet to some degree.

Finally, one of the distinct elements of the Manifesto is not just the collection of individual signatories, but the organizational ones. In addition to nonprofit endorsers such as Greenpeace Canada, the Sierra Club Canada, and Black Lives Matter – Toronto, there are labor union endorsements from the Toronto York Region Labour Council, the Canadian Union of Postal Workers, and the Public Service Alliance of Canada. Environmental and energy activists in the U.S. have to acknowledge that they have to confront the often strident and short-term thinking of labor unions here that seem committed to energy projects, even those of the dirtiest carbon emitters such as coal and other extractive industries, because of the jobs at stake. The Manifesto makes it clear that these environmental and energy activists are committed not just to making a green Canada, but working on the transitional issues that will keep Canadians employed and secure.

The glaring shortcoming is the missing names on the signatories list. With John Candy’s passing, we won’t be able to see Johnny LaRue standing up for the Manifesto, but we would hope that Guy Caballero, Earl Camembert, and Bob and Doug McKenzie sign on. That’s not to make the Manifesto a joke, but to recognize the diverse array of creative Canadians who like Naomi Klein recognize Canada’s need and capacity for creating a society that is powered by “truly just renewable energy”. –Rick Cohen