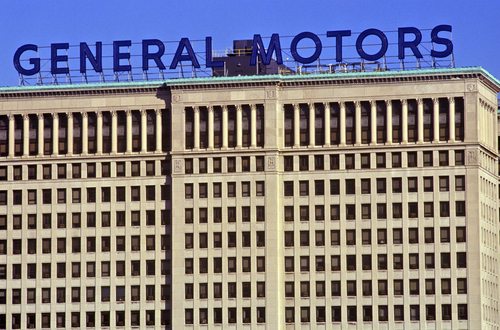 Remember when the U.S. taxpayers bailed out the Detroit carmakers? In the bailout, General Motors benefitted from an infusion of $50.7 billion and Chrysler got $10.7 billion. Don’t think that Ford didn’t benefit. In order not to be left completely behind by its competitors’ recapitalization, Ford did get access to a $9 billion federal government line of credit, plus a $5 billion loan from the Department of Energy through its “green car” funding initiative. Despite the hype, taxpayers haven’t done all that well with the auto manufacturers’ bailout:

The auto companies (other than Ford) were bankrupt charity cases for the American taxpayer. Now, even though they’re still in hock to the federal government, the auto companies are seeing and portraying themselves as philanthropic benefactors for the bankrupt city of their origins, Detroit. Writing for the New York Times, Bill Vlasic reports that “the car companies have donated millions to the city and community groups to ease their financial pain, [but] city officials and industry executives realize that the Big Three can no longer provide what Detroit really needs: more good-paying jobs.”

Still, the carmakers are making philanthropic grants. Vlasic notes Ford’s $10 million grant to revitalize a vacant community center in Detroit’s southwest, “millions” donated by GM “to support the public school system,” a personal gift of $1 million to Habitat for Humanity from GM CEO Daniel F. Akerson, and a GM fundraiser starring the Four Tops to raise money for the Karmanos Cancer Institute.

After a slowdown when they were clearly teetering in and out of bankruptcy, the carmakers are back to making philanthropic grants, according to the Form 990s filed by their company foundations. In 2011, the General Motors Foundation gave away $23.6 million, including $5.5 million for the United Way of Southeastern Michigan and $2 million for the Detroit Economic Growth Association. The Ford Motor Company Fund distributed $19.5 million in 2011, with $1.25 million to the United Way. The Chrysler Foundation disbursed only $1.1 million in 2011.

The companies received far more overt taxpayer charity during the bailout than they’ll ever return. No one really expected that the carmakers would reciprocate those billions in desperately-needed taxpayer funds with charitable contributions. Vlasic notes that some believe that Detroit’s decline began with the decentralization of car manufacturing out of Detroit, a process that started in the 1950s, if not before. While taxpayers were willing to reinvest in bankrupt auto companies, shouldn’t they be reasonable open to doing the same for the city that supported those companies for all those decades?—Rick Cohen