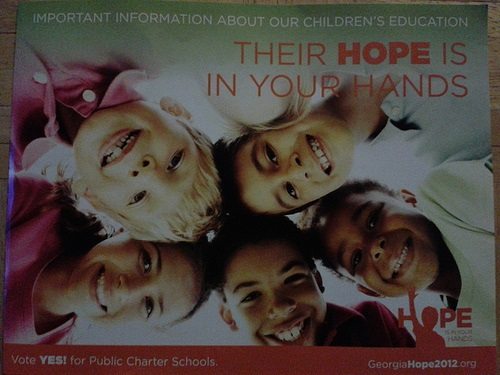 After the Bill & Melinda Gates Foundation, the nation’s second most prolific grantmaker for K-12 education are the Waltons, mostly through the Walton Family Foundation, and the key Walton family member on education is 44-year-old Carrie Walton Penner. Although the Waltons have provided grants to traditional public schools, they—and Carrie Penner in particular—are enthusiasts for charter schools. In a rare interview with Forbes, which Forbes describes as “her first extensive media interview,” Carrie Walton Penner reveals “a clear vision of the charter school movement over the next five years and her place in it, something that she’s been working toward, both consciously and unwillingly, over the past two decades.”

“We’ve always had a strategy and theory for change,” Penner tells Forbes. “The current plan has been to have a new supply of high-performing, mostly charters, for parents to choose from.” Putting all of her four children into private schools, Penner proclaims, “We’re living choice. That’s what we want for all parents.”

Kroll proclaims Penner as “the best positioned to lead the effort” to create more charter schools, which Kroll notes has allies such as the pro-charter Barack Obama and Secretary of Education Arne Duncan. The article includes various encomiums about Penner, including from Teach for America founding member Richard Barth, now CEO of KIPP, the large charter school organization, who warns that despite her quiet demeanor, “you would be mistaken to underestimate her.” The Waltons’ extensive support of KIPP—we counted over $56 million in Walton Family Foundation grants to KIPP’s national operation or to local KIPP schools between 2003 and 2012—and Penner’s presence as a KIPP board member may be part of Barth’s reason for recognizing her quiet power and influence. The single biggest recipient of Walton Family Foundation grants, according to Kroll, however, has been Teach for America, clocking in at $93 million.

Penner’s strategy is apparently to have charters take over entire school systems, taking advantage of the charter school dominance in New Orleans and Washington, D.C. “The new [Walton Family Foundation] five-year-plan will go further,” Kroll writes. “Expect the Waltons to soon announce two to four midsize ‘proof point’ cities with high poverty rates where they will work with on-the-ground partners to support students in and out of the school setting…Because this requires buy-ins from major stakeholders, they’ll start with cities politically inclined to support such efforts.”

The model sounds like the Harlem Children’s Zone strategy—like HCZ with a charter school at the center of the strategy—except that it is meant to be a city-wide replication and multiplication of HCZs. Remember, as with the Obama administration’s endorsement of charter schools, the Obama administration has been enthusiastic about the HCZ model, creating the Promise Neighborhoods program in the Department of Education to export the program around the nation.

While some charter school advocates tend to pitch charters as small yardstick competitors for traditional public schools, meant to operate within and as part of the public school system, Penner’s charter school strategy, as presented in the Forbes article, is much more aggressive, making charter schools dominant in localities. Charter school cities like New Orleans and D.C. would become the competitive yardstick for other cities. If you think a charter school here or there might be a useful kick in the pants for sluggish public schools, in the Walton strategy, the trajectory for charters is to be a comprehensive alternative to entire public school systems—and remember, it is no coincidence that the Waltons, on the very conservative side of the political spectrum, would be enthusiastic about charters, nine out of ten of which non-union. The Waltons have a vision for charters that, combined with the Gates Foundation, the Broad Foundation, Obama, and Duncan, is a pretty powerful juggernaut.—Rick Cohen