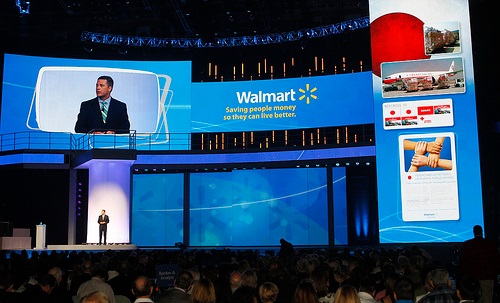 Walmart has been subject to some very bad press in the buildup to the shopping season this year, with part of that coming from protesting employees and the National Labor Relations Board. Since most of their shoppers are people on budgets, and this season may be a difficult one for them, is this an indicator or a symbol?

For whatever reason, Walmart chose the week before the big buying season starts to announce its new CEO, in the person of Doug McMillon, who currently heads the company’s international division. He will take the corner office in February and will be the fifth CEO in the company’s history.

Employee groups, which have been building pressure on the company regarding its low wages and other employment conditions, are expressing hope that the move may indicate a new beginning. While McMillon is a high level Walmart “company man” with a 29-year tenure, he did come up through the ranks. He started with Walmart as a summer employee when he was a teen, working in a distribution center in 1984. McMillon has been praised by analysts as a good choice.

Tiffany Beroid, one of the more than 800,000 store workers who earn less than $25,000 a year, and a member of OUR Walmart, said, “Walmart has been heading in the wrong direction, and it’s a testament to the pressure the company is feeling that they’re changing leadership at this moment.

“We’re happy to see Mr. McMillon acknowledge the hard work of associates in his statement this morning, and we hope that this appreciation translates into improving jobs for Walmart workers. We sincerely hope that Mr. McMillon will answer the country’s calls for Walmart to publicly commit to paying $25,000 a year, providing full-time work and ending its illegal retaliation against its own employees.”

If the change in executive leadership is meant as a symbolic indicator of change, it comes on the heels of another memorable symbol, in the “charity bins for employees in need” story that NPQ covered last week