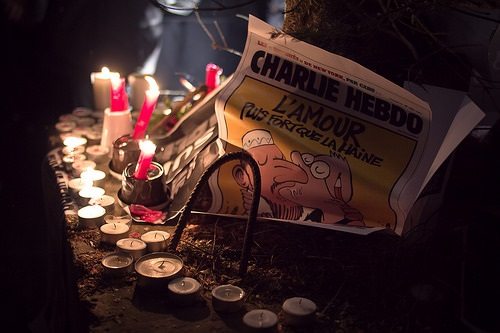 Al Jazeera’s English editor and executive producer Salah-Aldeen Khadr discussed how the Qatar-based news network should cover the massacre at the Charlie Hebdo massacre in Paris. He communicated his guidance in emails to his Al Jazeera colleagues, which the National Review obtained and printed. Khadr’s commentary and questions suggest that while the killing Charlie Hebdo staff might have been heinous, some people in the world of journalism think that the French satirical magazine had crossed a boundary of racism and anti-Muslim attitudes that merited condemnation. Here are excerpts from Khadr’s emails to his staff:

Khadr’s emails sparked a spirited debate among Al Jazeera reporters. Correspondent Mohamed Vall Salem wrote, “What Charlie Hebdo did was not free speech, it was an abuse of free speech in my opinion… it’s not about what the drawing said, it was about how they said it. I condemn those heinous killings, but I’M NOT CHARLIE.” Paris-based correspondent Jacky Rowland, who has been reporting on the terrorist actions on the ground, responded, “We are Aljazeera. So, a polite reminder: journalismisnotacrime,” referring to the hashtag Al Jazeera itself has used concerning its three correspondents sitting in jail in Egypt.

“First, I condemn the brutal killing. But I AM NOT CHARLIE.

JOURNALISM IS NOT A CRIME

AND NOT DOING JOURNALISM PROPERLY IS CRIME”

The internal Al Jazeera debate shouldn’t be a surprise. Undoubtedly, there are many people inside and outside of journalism who don’t see Charlie Hebdo’s satire as acceptable journalism, who view the cartoon images of the Prophet Mohammed as insulting and racist, and perhaps, even as Khadr hinted, generating the animus that in the extreme led to the terrorist killings.

It seems to us, however, contrary to Khadr’s view, that the terrorists did attack free speech and French society, especially in light of their point-blank execution of a wounded French policeman (who happened to be Muslim) and their colleague’s attack on a Kosher meat market with the aim of killing Jews (he killed four hostages). Satire, we would suggest, is not journalism per se, but it is a form of speech that is worth defending, else the line of protected and unprotected speech gets blurred.

That is the point of New York Times columnist David Brooks, who wrote that if someone had tried to publish the satirical Charlie Hebdo cartoons “on any American university campus over the last two decades, it wouldn’t have lasted 30 seconds. Student and faculty groups would have accused them of hate speech. The administration would have cut financing and shut them down.”

Brooks’s critique is directed against the speech codes that are common at many major universities:

“Public reaction to the attack in Paris has revealed that there are a lot of people who are quick to lionize those who offend the views of Islamist terrorists in France but who are a lot less tolerant toward those who offend their own views at home…Americans may laud Charlie Hebdo for being brave enough to publish cartoons ridiculing the Prophet Muhammad, but if Ayaan Hirsi Ali is invited to campus, there are often calls to deny her a podium…So this might be a teachable moment. As we are mortified by the slaughter of those writers and editors in Paris, it’s a good time to come up with a less hypocritical approach to our own controversial figures, provocateurs and satirists.”

Brooks may be taking his argument to an extreme, as his defense of satire is categorically different than a defense of hate speech. He offers, however, a useful perspective on satire:

“Satirists and ridiculers expose our weakness and vanity when we are feeling proud. They puncture the self-puffery of the successful. They level social inequality by bringing the mighty low. When they are effective they help us address our foibles communally, since laughter is one of the ultimate bonding experiences…Moreover, provocateurs and ridiculers expose the stupidity of the fundamentalists. Fundamentalists are people who take everything literally. They are incapable of multiple viewpoints. They are incapable of seeing that while their religion may be worthy of the deepest reverence, it is also true that most religions are kind of weird. Satirists expose those who are incapable of laughing at themselves and teach the rest of us that we probably should.”

We hope and expect that Brooks would distinguish satire as he has defined it so well from hate speech, which is meant to cause pain and suffering, not laughter.

However, Brooks is on to something when it comes to the issue of hypocrisy. We noted in our coverage of the terrorist attacks that Charlie Hebdo itself, or rather its predecessor magazine, had been shut down by French authorities some years ago after its lampooning of Charles de Gaulle. George Washington University law professor Jonathan Turley lambastes the French, prior to the country’s outrage about the Charlie Hebdo killings, “for leading the Western world in a crackdown on free speech.” Turley writes that France has extensive laws that “criminaliz[e] speech that insults, defames or incites hatred, discrimination or violence on the basis of religion, race, ethnicity, nationality, disability, sex or sexual orientation,” and those laws had been used to harass Charlie Hebdo for years. Former president Jacques Chirac had condemned Charlie Hebdo for its “obvious provocations” in reprinting the famous Danish cartoons of the prophet Mohammed. Turley points out examples of French hypocrisy on free speech and even the hypocrisy of groups such as the Union of Jewish Students, whose representative told NBC News that they defended the magazine’s right to criticize religion—though last year the organization successfully sued Twitter in France because of posts it deemed anti-Semitic.

These are all difficult issues, but in our society—in modern society—free speech is important to protect. Much of the writing our modern society accepts today was censored and condemned in the past as unacceptable and even illegal. Writers have long faced vigorous attempts to silence them—remember such writers as Oscar Wilde, Aleksandr Solzhenitsyn, Pablo Neruda, and D.H. Lawrence—or to try to kill them, as in Ayatollah Khomeini’s fatwa against Salman Rushdie.

“Religion, a mediaeval form of unreason, when combined with modern weaponry becomes a real threat to our freedoms. This religious totalitarianism has caused a deadly mutation in the heart of Islam and we see the tragic consequences in Paris today. I stand with Charlie Hebdo, as we all must, to defend the art of satire, which has always been a force for liberty and against tyranny, dishonesty and stupidity. ‘Respect for religion’ has become a code phrase meaning ‘fear of religion.’ Religions, like all other ideas, deserve criticism, satire, and, yes, our fearless disrespect.”

Khadr’s questions to the Al Jazeera staff are perfectly acceptable challenges to the “idea” of Charlie Hebdo’s satire. That is the kind of debate that press outlets like Al Jazeera and even we at Nonprofit Quarterly should be willing to have. Hopefully, in the end, like Khadr and others, readers will be able to exercise their decisions regarding literary taste and propriety while defending the legitimacy of satire (albeit different than “journalism”) and standing up against those who, to make a point, combine seventh-century unreason with modern weaponry to execute cartoonists, passing police officers, and shoppers at a meat market. After contemplating Khadr’s questions and the Al Jazeera staff debate, for this writer, the conclusion is still, “Je Suis Charlie.”—Rick Cohen