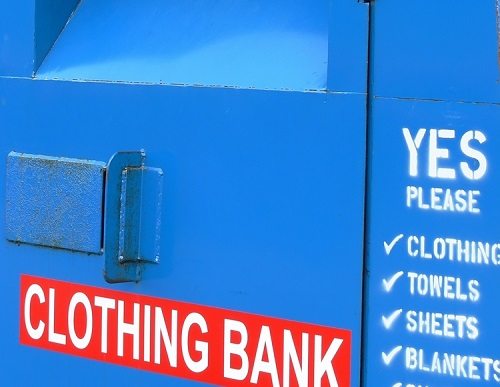 E’Co Australia Pty Ltd settled out of court following legal action by Western Australia’s Commissioner for Consumer Protection. Along with the donation of $100,000 to charity, the company agreed to publish a prominent paid apology in a newspaper.

The company’s “charity bins” displayed images and text suggesting unwanted clothes would be given to disadvantaged kids in Africa. The words on the bins said, “Sending your old clothes, shoes and manchester (an Australian term for blankets, sheets and towels) to Africa!” and “A not-for-profit organisation saving tomorrow’s environment today.”

E’co Australia is not, in fact, an officially registered charity. Nor are the clothes distributed to African children; the goods collected are sold to second-hand merchants in Africa.

The practice of disguising commercial clothing donation bins is widespread in Australia, according to an investigation by the Herald Sun. In the city of Melbourne, eighty percent of clothing bins are operated by commercial businesses, not registered charities.

Australia’s National Association of Charitable Recycling Organisations’ (NACRO) chief executive Kerryn Caulfield says, “The public don’t understand they are giving goods to a company that profits from selling items. It is big business.”

Meanwhile, E’co Australia’s website is under reconstruction and carries this message:

“Due to recent accusations against E’Co, a statement from Director Mark Keay will be posted on the websites [sic] “About” section next week, please check back soon or fill out a contact form & we will be pleased too email you a copy of the statement directly to your email.

“Their [sic] are two sides to every story so please check back next week to see E’Co’s side. We are happy to answer any questions you may have & we thank you for your support.”