It should be no surprise that those who research giving trends are fighting over speculative data about how much was given away last year. Up front, I say that I side with Giving USA on this one, because it is very unlikely that the predictions from the Dallas-based Atlas of Giving that U.S. giving skyrocketed by 13 percent in 2013 are right.

Atlas has made claims that a record $416.5 billion was donated last year—an increase of 13 percent. But according to Patrick Rooney, an associate dean at the Indiana University Lilly Family School of Philanthropy, that estimate is “fallacious, simplistic, and wrong,” and on the whole we trust the care that Giving USA has taken over the years.

Judging levels of giving is a complicated process. That said, this graph from last year’s Giving USA report suggested that we were on track to set a record for slowest recovery after a recession. The Atlas predictions would be a marked anomaly not only for these times, but also in terms of any recovery after a downturn. NPQ’s big argument with Giving USA last year was that we thought that they were putting too good a face on the rate of recovery in giving. 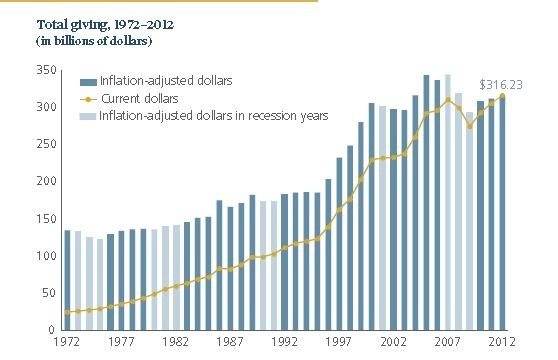 Quoting Tom Watson in this article in Forbes, “My own spider sense tells me philanthropy is not undergoing an explosive period of growth; nonprofits continue to struggle to make their yearly nut just as the public sector continues to curtail social services in many areas. The big fish at the top of each sector’s food chain—major universities, household name national nonprofits, and go-to disaster relief organizations—continue to do well and have stabilized since the recession. Lots of small but worthy charities struggle. And I do not sense that U.S. philanthropy is poised to grow past its traditional 2 percent of GDP in good times or bad.”

What do you think? Has giving in these here United states taken a gargantuan structural leap into the statosphere?—Ruth McCambridge