Chattanooga: A Model of Urban Revitalization, or Inequality and Gentrification? 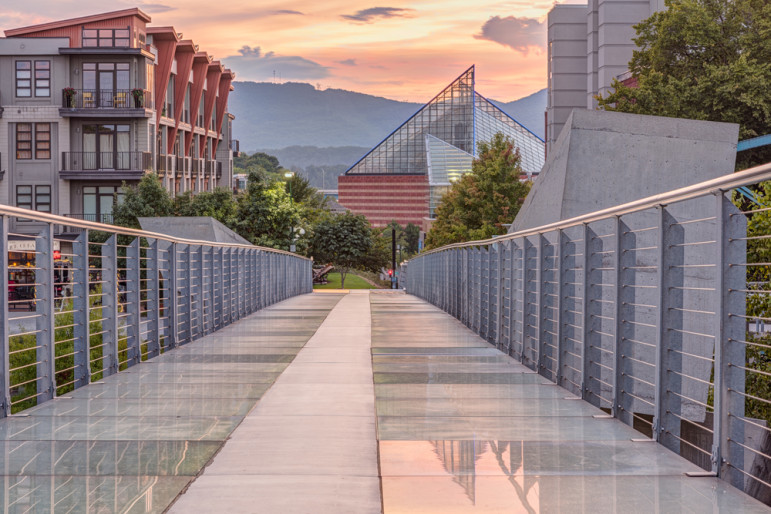 The vice president and director of the Brookings Institution’s Metropolitan Policy Program, Bruce Katz, has been a promoter of the concept of “innovation districts,” which he and his colleague, Julie Wagner, define as “geographic areas where leading-edge anchor institutions and companies cluster and connect with start-ups, business incubators, and accelerators.” As an example of innovation districts, he cites the expanding presence of Google outside of Silicon Valley in places such as London’s Tech City, New York’s Chelsea neighborhood, and Pittsburgh’s Bakery Square as evidence that urban innovation districts that allow companies like Google to take advantage of city locations for their increased access to “growing tech-oriented ecosystems, advanced research institutions, deep pools of talent, and distinct regional specializations.”

Although Katz has in the past cited Cambridge’s Kendall Square as such an “emblematic” innovation district, he has acknowledged that “not every city can replicate Kendall Square, because, frankly, not every city has an MIT.” However, in one of his recent Brookings blog posts, Katz suggests that “U.S. cities—particularly small and medium-sized ones—can take multiple paths to unleashing their distinct innovative economies.” His example is a 140-acre area in downtown Chattanooga, Tennessee, which takes advantage of three assets: quality placemaking, unusual anchor institutions, and a highly collaborative innovation ecosystem.

Regarding Chattanooga’s “quality placemaking,” Katz cites the city’s investment in new riverfront parks and downtown cultural institutions, plus the construction of hundreds of hotel rooms, thousands of apartments (some with affordable set-asides due to city tax incentives), and a home grown “coffee scene.” It adds up to a “live-work-play” district responsive to the “demands of younger workers and innovative firms.”

In the category of “unusual anchors,” Katz cites the development of an extensive municipal high-speed Internet network by the Chattanooga Electric Power Board. Chattanooga mayor Andy Berke describes Chattanooga’s high speed “Gig City” as giving the city “the fastest, cheapest, most pervasive internet in the Western Hemisphere.” This, Katz says, is attractive to many tech entrepreneurs and other businesses to relocate to Chattanooga.

The third asset element Katz cites is its “genuine, enthusiastic collaboration—not often seen in bigger cities—between public, private, and civic institutions and leaders,” including the city and county governments, the Energy Power Board, and private foundations, the latter including the Lyndhurst and Benwood Foundations. Katz adds in other collaborators such as the University of Tennessee at Chattanooga, various investors, business incubators, and real estate developers (including River City Company, DEW Properties, and Fidelity Trust) as a mix of “diverse…players—with very different experiences and world views—[that are] truly ‘collaborating to compete.’”

In Katz’s laudatory description of Chattanooga’s high-tech innovation district dynamic, to be punctuated with Chattanooga’s hosting of the 2015 Startup Angel Summit for the national venture fund sector, the potential downside of this mini-Silicon Valley doesn’t get any mention. As an experienced urban hand, Katz knows full well that the high-tech entrepreneur onslaught in places like Kendall Square or in San Francisco (where buses from Google, Facebook, Netflix, and other tech industry businesses take their employees back and forth from neighborhoods where they have already priced out working people and middle-income people from the housing market) is fraught with difficulties for those people who aren’t part of the younger workers’ “live-work-play” environment.

For example, last year in a study of 102 metropolitan areas, Chattanooga ranked in the top ten for the highest rates of serious income inequality. According to a recent presentation to the Chattanooga City Council by Chattanooga Organized for Action, Chattanooga has the nation’s seventh-highest rate of increase in rents and a significant shortfall in affordable rental housing, to be exacerbated by the planned demolition of at least two public housing developments. Only a few years ago, a researcher at the Thomas B. Fordham Institute published data that showed the Southside area of Chattanooga, basically ZIP code 37408, as suffering the second-fastest rate of gentrification in the country as indicated by a population shift from black to white. The Fordham analysis showed the racial composition of the neighborhood changing from 7.2 percent white to 45.9 percent white between 2000 and 2010, though the report’s reliance on racial change as the indicator of gentrification may not be sufficient.

In 2012, the New York Times described the Chattanooga strategy as “a dramatic overhaul with a radical gentrification plan and an aggressive citywide push to lure artists,” a focus of sorts on drawing in “creative class” hipsters and entrepreneurs so favored by trendy urban observers like Richard Florida. However, Ken Chilton (formerly of the Ochs Center for Metropolitan Studies) has conducted research on Chattanooga and come to the conclusion that in the city, “inequality is the new normal,” especially when it comes to racial groups. Chilton contends that despite the gentrification, and notwithstanding Gig City and other developments, there is now hardly any black middle class left in Chattanooga.

“Something special is happening in Chattanooga,” Katz writes. “They are inventing a distinctive version of an innovation district that builds on their high quality of life, unique competitive advantages, and collaborative culture. The more traditional innovation districts have a lot to learn from the Gig City.” That may be true, but what is not special, but rather entirely too common, is the deepening of income and racial inequities in the midst of metropolitan progress. That part of the Chattanooga story is not to be celebrated, but will require foundations like Lyndhurst to redouble their efforts to identify and invest “in initiatives, institutions, people and programs that contribute to the long-term livability and resilience of the greater Chattanooga region,” as the mission of Lyndhurst reads, but aiming toward the uplift and advancement rather than gentrification and displacement of the city’s working class and poor.—Rick Cohen

Correction: Ken Chilton is no longer with the Ochs Center. He is now an assistant professor at Tennessee State University.