Are Children at Risk as CHIP Gets Lost in the Healthcare Kerfuffle?

As people celebrate or mourn the defeat of the Graham/Cassidy healthcare bill, another important healthcare program is in danger of disappearing if it is not reauthorized by September 30th. The Children’s Health Insurance Program (CHIP), a successful state/federal and bipartisan partnership since 1997, is about to be lost in the partisan bickering of D.C., and the real losers will be children and families.

Since it was initiated in 1997, CHIP has grown the share of low-income children and pregnant women nationwide who have healthcare coverage from 86 percent to a current high of 95 percent today.

The September 30th deadline was set up two years ago and so should not come as a surprise. But it may reflect the chaos in setting priorities in D.C. and where children, who pay no taxes and do not vote, fall in the pecking order.

In reporting on this issue in Roll Call, Rebecca Adams indicated the huge reach of CHIP and the depth of what losing it, even on a temporary basis, could mean:

If Congress fails to extend CHIP, about 1.1 million people in the program could lose coverage completely, according to a study for the Commonwealth Fund by George Washington University professor Sara Rosenbaum, who also chaired the Medicaid access commission until earlier this year. Many others could face scaled-back coverage and significantly higher out-of-pocket costs, which could discourage people from getting or staying covered, and states would have to find more money as federal contributions fall.

The 8.9 million people the program covers is nearly as many as the 10.3 million people that [the Centers for Medicare and Medicaid Services] said were covered earlier this year through the marketplaces established by the 2010 health care law.

The chart below gives a clear indication of the success of this program: 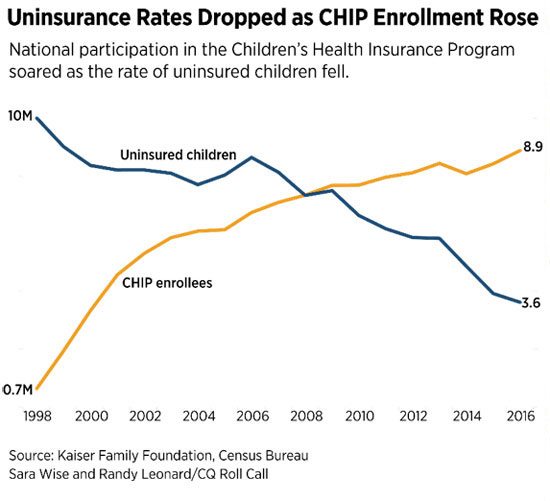 The funds coming from the federal government to the states for CHIP have made up the bulk of the funding, with states adding a portion that varies from state to state. States can use up to two-thirds of any leftover funds until it is gone, which has led lawmakers to feel they have more time past the deadline to act.

State officials in both blue and red states, including those with enough funds to carry them into the spring, are unified in their concern. Warning notices to families are being prepared to tell them their coverage might disappear.

Minnesota is the first state to hit a funding crisis, but others are on the cusp. Nine other states are projected to face a shortfall by the end of the year because Congress has not yet acted to renew federal funding for the 8.9 million children and women served by CHIP.

The Senate, and to a much lesser extent the House, have tinkered around the edges on this legislation, giving state officials some hope even though the Senate bill, a five-year plan, would decrease contributions to the states after two years. But without a sense of timing for actual consideration on the Senate floor, some fear this healthcare bill could become another part of the ongoing healthcare fight.

Governors are weighing in on this, hoping that Congress will understand how important this children’s program is. Utah’s Governor Gary Herbert noted the efforts of Finance Chairman Orrin Hatch, who created the program with then-Senator Edward M. Kennedy. Herbert said, “Our most vulnerable children and their families depend on CHIP for cost-saving pediatric care, and the state of Utah needs the certainty of ongoing support for CHIP in order to budget appropriately for the near term.”

The consequences for not meeting this deadline are dire and many for the children and women whom CHIP currently serves. Some states would cap enrollment or shut off coverage entirely. Because some states are not allowed to stop this coverage and some are, outcomes depend on where a child lives. All states would need to assume the time and the costs of preparing staff to deal with this change. Some states would stop promoting the program in order to save on costs of new enrollments.

And parts of CHIP would halt completely September 30th. For instance, states would lose the ability to expedite enrollment or the renewal of a child’s benefits in CHIP by using information from other programs such as State Temporary Assistance for Needy Families, Medicaid or the food stamp benefits through the Supplemental Nutrition Assistance Program.

That so-called “express lane” process has helped kids get covered without delays. The Georgetown Center for Children and Families cites an evaluation of the flexibility that shows it offers administrative savings and reduced barriers to coverage.

If families in those states that can freeze enrollment lose coverage, they might be able to turn to the health care law exchanges for coverage if their income is between the federal poverty level and four times the poverty level.

But the benefits of the 2010 health care law are not as generous for children. During the Obama administration, HHS was supposed to certify any exchange plans that are as good as CHIP, but officials decided there weren’t any.

Lawmakers essentially would be turning families away from a highly regarded program and into (for those who qualify) the very health care exchanges Republicans deride as inadequate and harmful. In five states this year, consumers had only one insurance company to choose from—a point that critics cite as evidence of the failure of the 2010 health care law.

And if they aren’t eligible for marketplace insurance or can’t afford to buy it on their own, families might end up with no coverage at all.

There are no winners if CHIP is not renewed and reauthorized quickly. State officials from all parties are urging Congress to act now. Whether Congress will hear their pleas and those of the 8.9 million low income children and families who are the beneficiaries of CHIP remains to be seen.—Carole Levine