While Trump rolls back carbon emission controls, moving the U.S. away from reaching Paris Agreement targets, according to a new analysis by Climate Action Tracker, China and India look set to beat their goals. Both countries are cutting coal production and increasing renewable energy. 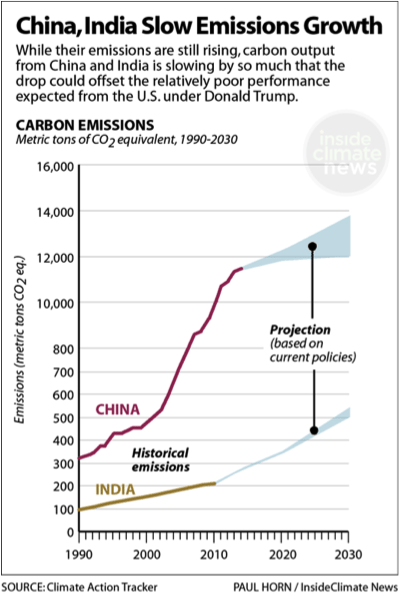 China, the U.S., and India are the top three carbon polluters, respectively. China and India’s reductions “are enough to outweigh the effect of Trump’s proposed rollback in U.S. climate policy, which is likely to put the nation on track to emit 400 million metric tons more than previously projected by 2030.”

In China, coal consumption has been in decline for the last three years. In Beijing, 100 new coal power plants, some already under construction, were cancelled. “The fast growth of renewable energy—and slowing energy demand—made the new plants unnecessary.”

Cancellation of those plants, totaling 120 gigawatts of capacity, adds up to savings of about 750 million metric tons of carbon dioxide annually. That’s about equivalent to the amount that the United States cut its annual emissions from 2007 to 2015.

If this trend continues, Carbon Tracker says, “China is on track to achieve or surpass its goal to reduce its emissions intensity by 64 to 70 percent below its 2005 levels by 2030.”

In India, solar voltaic prices are at a historic low, making solar energy competitive. In fact, the growth of renewable energy is so fast that it is set to supply 40 percent of electricity-users, the 2030 goal, by 2022. India’s draft electricity plan has it reaching 57 percent renewable energy by 2027. Like China, India cancelled large-scale coal-fired power projects due to “cheaper renewable energy and slowing of demand growth.”

“Five years ago, the idea of either China or India stopping—or even slowing—coal use was considered an insurmountable hurdle, as coal-fired power plants were thought by many to be necessary to satisfy the energy demands of these countries,” said Bill Hare, CEO of Climate Analytics, one of the research consortium members.

The cuts in energy demand in China and India are significant because their economies are growing at 7 percent annually, significantly faster than the world average of 2.7 percent (and U.S. GDP growth of 2.6 percent), according to the World Bank.

For too long, we’ve been held back by burdensome regulations on our energy industry. President Trump is committed to eliminating harmful and unnecessary policies such as the Climate Action Plan and the Waters of the U.S. rule. Lifting these restrictions will greatly help American workers, increasing wages by more than $30 billion over the next 7 years.

The Trump Administration is also committed to clean coal technology, and to reviving America’s coal industry, which has been hurting for too long.

Carbon Tracker rated both China and India’s climate plans as “medium” because emissions are still on track to grow. Trump’s climate plan would downgrade the U.S. from “medium” to “inadequate.” The Paris Agreement seeks to keep “a global temperature rise this century well below 2 degrees Celsius above pre-industrial levels and to pursue efforts to limit the temperature increase even further to 1.5 degrees Celsius,” and these policies don’t get us there.—Cyndi Suarez