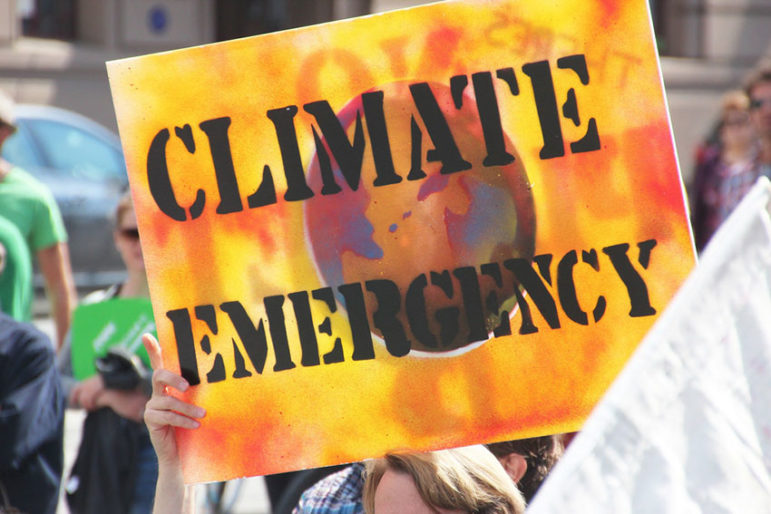 Amid well-founded fears that the federal government will soon dial back support for green energy and sustainability initiatives, city and state governments may be taking an increasingly important role in the fight against climate change. In fact, writes David Roberts for Vox, city governments are crucial actors in carbon reduction, regardless of which party controls the White House.

Cities are responsible for most of the world’s energy use

Roberts cites a 2014 report from the Intergovernmental Panel on Climate Change, which found that urban areas account for more than half of the world’s energy use and about 75 percent of energy-related carbon dioxide emissions. Over half of the world’s people live in urban areas, and the WHO predicts that urbanization will continue to rise rapidly through the next several decades, even in less-developed countries. As a result, urban areas will become increasingly responsible for CO2 emissions—and they’ll likely be the first to feel the effects of climate change. They’ll also be the areas with the greatest opportunities for de-carbonization.

Because urban centers hold so much of the world’s vehicles, buildings, electrical grids, roads, et cetera, Roger writes, fixes to urban planning and infrastructure can make a huge impact on greenhouse gas emissions.

A study from the Mercator Research Institute on Global Commons and Climate Change shows that infrastructure and city planning differences could, if implemented as urbanization occurs, “result in differences in urban transport and residential [greenhouse gas] emissions by a factor of ten.” The authors of the study write that “urban climate solutions should be structured along infrastructures”—both through greener new development and through replacing and repairing old infrastructure.

Because road systems and land-use zoning are so slow to change, the stakes are high with new infrastructure: If greener systems are put into place, they’re likely to stay in place. Better urban planning and new transport structures—i.e., improvements made only to new infrastructure, the majority of which will be built in Africa and Asia in coming years—could reduce future energy use of global cities by “about 25 percent relative to business as usual,” according to the Mercator study.

Major cities are creating a pathway to major CO2 reductions

In terms of the total reductions necessary to limit rising global temperatures to the trajectory agreed to in the Paris Agreement, urban carbon emissions will need to stay relatively low in developing cities—and will need to drop drastically in developed nations, such as in the U.S. Roberts notes that the world’s biggest cities are already working together to meet global climate change targets.

C40, a climate change coalition of 86 of the world’s largest and wealthiest cities, recently identified their members’ share of the remaining global carbon budgets to 2100. These budgets plan emissions trajectories in step with the Paris goal of limiting global temperature rise to 1.5 degrees. A partner report on the 12 American C40 cities shows pathways for these cities to create about 7 percent of the carbon reduction planned by all C40 cities. If all U.S. cities (defined in the report as cities with over 100,000 residents) follow suit, the resulting savings could account for 6 percent of total carbon reduction required by the Paris Agreement.

The work of reducing carbon emissions on a large scale will not be easy, especially for smaller urban areas. Another IPCC report states that worldwide urban growth is most rapid in cities with 500,000 residents or fewer but that these cities are often less efficient than larger cities due to smaller infrastructure budgets and limited government capacity. Smaller cities are nevertheless increasingly finding reason to support carbon reduction at the local level.

Jeff Biggers of the University of Iowa, writing for the New York Times, recently posited that the very nature of urban life makes climate change a public health crisis for cities, even smaller cities. People living in close quarters suffer from higher heat levels in the summer; coastal cities are experiencing flooding and unpredictable weather, and agricultural disruptions threaten food security. Biggers writes, “It is obvious that city planners, mayors and governors have had to re-envision how their cities generate energy and provide food and transportation.” Mayor Michael Bloomberg put it a bit more bluntly in another post-election editorial:

Cities, businesses and citizens will continue reducing emissions, because they have concluded…that doing so is in their own self-interest.

Since November 8th, much has been written on president-elect Donald Trump’s plans to cut clean energy spending, his intention to pull the U.S. out of the Paris climate agreement, his relationships with climate-denying advisors, and his recent chat with Al Gore. Concerned citizens, activists and nonprofits may be realizing that now and over the long-term, there’s plenty to accomplish at the local level—and plenty of municipalities willing to help with or without support from the U.S. federal government.—Lauren Karch