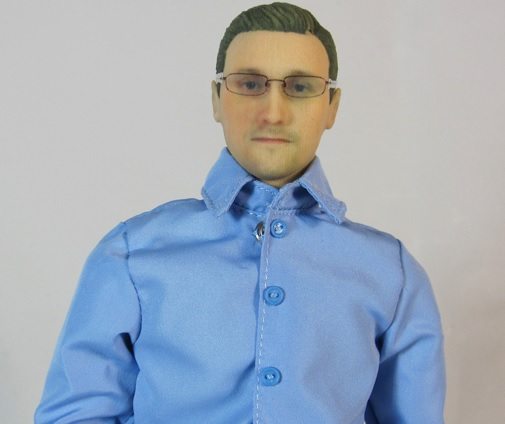 When we heard about an Edward Snowden action figure, we thought to ourselves, what a growth industry for some social enterprising type! Civil society action figures!

The Snowden doll is being marketed by being marketed by ThatsMyFace.com, a company that confoundedly “specializes in products and services related to facial reconstruction and analysis.” Snowden joins the likes of Julian Assange, Hugo Chavez, Paul Ryan, and even Joseph Kony in the company’s offerings of 12-inch-tall celebrity dolls.

A $99 price tag brings you “Edward Snowden’s custom action figure head mounted on a 12-inch action figure body with a several choices of outfit styles. By selecting ‘Head Only’ in the Outfit selection box above, you can also buy Edward Snowden’s head for $60 only and fit it onto your own 12-inch figurines.” You can also get your own head crafted to mount on Snowden’s body, if you want….

ThatsMyFace says all profits from sales of the foot-high G.I. Snow(den) will be donated to the Freedom of the Press Foundation, which eschews any knowledge of the scheme.

NPQ can think of a number of civil society actors that would make great action figures. The Pussy Riot women with an extensive wardrobe of brightly colored tights and dresses would be just the thing for some of my young relatives. The kids would certainly like the idea that you can pop the heads off one to put on the body of another.

In any case, we’d love to hear your ideas for civil society action figures.—Ruth McCambridge