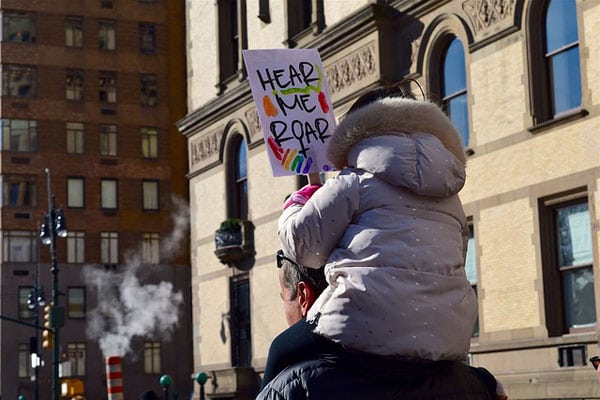 At NPQ, we have often covered the rise of social movement activism in the US, whether that involves Black Lives Matter, the post-inauguration women’s march on Washington (and related protests around the world), the national gun control protests that arose after the Parkland massacre, the #MeToo movement, or immigrant rights protests, to name a few examples.

When you add it up, it turns out that “one in five adults has attended a protest or political rally in the past two years,” notes John Prideaux, US editor of the Economist. By contrast, “less than five percent of voters went to a Trump or Clinton rally in 2016.”

This rising activism has had a political impact already. Prideaux observes that, “Two years ago, 28 Congressional seats were so safe that Republican candidates ran unopposed; in November’s midterms Democrats will contest all but four House districts.”

The incredulity and anger…that followed Mr. Trump’s election resulted in nearly 150 percent more women putting themselves forward for congressional primaries this year than in the equivalent races two years ago. In the two years before the presidential election in 2016, Emily’s List, which exists to help elect female Democrats to office, was contacted by 900 women who wanted to run. Since Mr. Trump became president, 36,000 have put themselves forward.

“All this civic-mindedness is uplifting,” writes Prideaux. But unless a major political realignment upends the US two-party system, the task of building a majority political coalition will fall to the Democratic Party, which, Prideaux observes, “is not making the most of the moment.”

One reason, Prideaux suggests, may be greater diversity, both in viewpoints and demography, in the Democratic Party. One effect of this heterogeneity, according to University of Maryland political scientist David Karol, is to encourage Democrats in Congress to observe strict seniority, which avoids conflict but holds back fresh leadership. As Prideaux puts it, “Replacing a party grandee means a fight between interest groups. Choosing by seniority avoids that. This helps explain why a party that thinks of itself as more appealing to younger voters has a leader in the Senate (Chuck Schumer) who is 67 and a leader in the House (Nancy Pelosi) who is 78.”

A second shift that Prideaux points out is that, according to Pew Research Center data, today more Democrats self-identify as liberal than moderate, but historically the party has been more moderate than liberal. Party leadership (held in place by the seniority norm) has yet to catch up.

A third observation made in another Economist article in the series is that the traditional idea that you win elections by moving to the center no longer holds water:

The “median-voter theorem” once held that the party that hews closest to the views of the median voter usually wins. It was taught to this generation of academics as akin to the law of gravity, but has since become the political science equivalent of believing Earth to be flat. When politics is so polarized, people no longer cluster in the ideological middle. And besides, the belief that voters are calculating machines who carefully weigh policies before opting for whoever offers them the best deal, is hard to sustain.

Again, at one time, seeking the median voter was a successful strategy—and it played into the hands of the Democratic Party’s formerly moderate base. But holding on to this shibboleth today is hard to justify. Clearly, promoting turnout is far more important.

But how do you get voters to turn out? As the Economist makes clear, while US liberals poll higher on policy, conservatives poll higher on narrative and framing. As political scientists David Hopkins and Matt Grossmann put it in Asymmetric Politics, “The public mostly agrees with the Republicans in philosophical terms and with the Democrats in policy terms.” These results are also, of course, as the Economist acknowledges, abetted by an electoral system that favors Republican voters since the Senate over-represents rural states and current House district lines were mostly drawn by Republican state legislatures.

In the Economist, Hopkins and Grossman’s findings are summarized as follows: “Voters are ideological conservatives but operational liberals. Small government is more popular than big government in theory, but voters do not like spending cuts.” The Economist adds that these results hold even though voters recognize that higher spending means higher taxes.

In the series, The Economist asks whether the Democratic Party should move to the left or center. But that’s hardly the right question. The question, rather, is how to articulate a compelling political philosophy and turnout strategy that converts policy majorities into electoral ones.—Steve Dubb

Organizing for the New World: Catalyst

CDFIs and the COVID-19 Moment: Whither Now, Community...