Friends For Health: Supporting the North Shore Health Center (GuideStar page) and Terry Kass, a woman seeking to give a gift to the charity, are the lead plaintiffs in a lawsuit brought by Edelson PC alleging that PayPal’s Charitable Giving Fund misrepresented its operations and its relationships with most U.S. nonprofit organizations and took donors’ gifts intended for specific charities and directed them without consent to charities of PayPal’s choice. The lawsuit, filed in federal court in Chicago, asks for the suit to receive class action status on behalf of all charities and all donors to charities that were misled and/or harmed by PayPal’s actions as well as those of the Washington, D.C.–based PayPal Charitable Giving Fund.

The 36-page complaint outlines the process (including screenshots of actual webpages) the PayPal Charitable Giving Fund uses to solicit gifts from its account holders on behalf of 501(c)(3) public charities, and where that process allegedly goes wrong.

PayPal tells donors that they can give to more than a million U.S. nonprofits using their web-based interface. However, what donors aren’t told is that only charities that have a PayPal business account and which have registered with PayPal Charitable Giving Fund may receive donors’ gifts. According to the complaint, only 29,000 nonprofits had registered accounts in 2015, which matches what the Fund reported on its 2015 Form 990.

In Terry Kass’s case, she used PayPal to give a total of $3,250 to 13 different nonprofits, including Friends for Health.

Unbeknownst to Kass, even though PayPal giving platform profile pages for all thirteen charities already existed, only three of them were actually registered with Defendants, and only those three could receive donated funds. As such, instead of delivering a combined $3,250 to thirteen different charities, Defendants only delivered a combined $100, or 3 percent of her donation, to those three charities. The remaining $3,150—which Plaintiff Kass donated to ten local-level charities—was withheld from the intended organizations. [Italics in original.]

The donation webpages not only use many nonprofits’ names and logos apparently without the knowledge or consent of the organizations, the pages often include information leading a donor to believe the process for a specific charity has been vetted and endorsed by PayPal. The PayPal donation page for Friends for Health is included in the complaint. 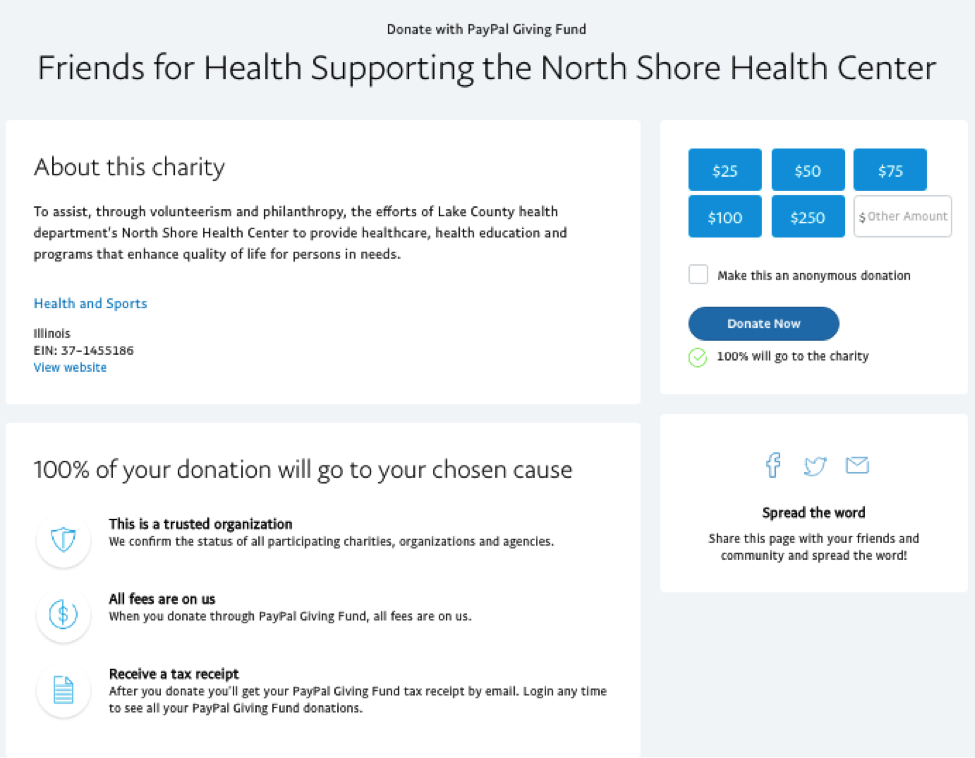 According to the plaintiffs, the wording of the following link implies that all nonprofit organizations included in a donor’s search results are already enrolled in PayPal’s Giving Fund:

The complaint alleges that PayPal never informs donors that processing their gifts for the charity of their choice is dependent on a business relationship between PayPal and the charity. PayPal doesn’t routinely inform nonprofits not registered with them or the PayPal Charitable Giving Fund that it is holding gifts intended for them. PayPal doesn’t tell either its customers making donations or the affected nonprofits that six months following receipt of gifts for non-registered charities, those gifts are donated by PayPal to charities of PayPal’s choice.

Among other reasons, this lack of transparency is a problem for donors because the donation process leads to a screen displaying a printable receipt showing the gift amount and the intended recipient charity. The accompanying text advises donors to use the receipt for tax purposes. However, if the intended charity isn’t among the 29,000 with which PayPal and PayPal Giving Fund have a relationship, the funds won’t go to the intended charity and the donor’s tax receipt will be inaccurate.

All is not well for registered nonprofits successfully receiving gifts though the PayPal Charitable Giving Fund. PayPal does not share a donor’s identity and customer infomation with the nonprofit, even when the donor authorizes sharing that information. The complaint notes that this PayPal practice harms nonprofits by not allowing them to build a relationship with donors using the PayPal interface.

The suit identifies a total of seven causes for action and asks the court for 16 actions, ranging from certifying the complaint as a class action (with Friends for Health and Kass as lead plaintiffs representing the class) to forcing PayPal and its Giving Fund to make a complete accounting of funds donated and awarding actual, punitive, compensatory, and other damages to the plaintiffs.

The lawsuit illustrates the complexity that belies the simplicity of online donation platforms. For example, few donors realize that their gifts are, in fact, gifts to intermediaries like the PayPal Giving Fund rather than direct gifts to their intended charity. Nonprofits receiving these gifts speak of giving “hard credit” to the intermediary (e.g., PayPal Giving Fund) that actually sent the funds to the organization, and “soft credit” to the donor who made the gift to the intermediary, earmarked for the intended nonprofit (e.g., Friends for Health).

The lawsuit also brings up the thorny issue of how much of a donor’s gift actually gets to the intended charity. PayPal promised not only that 100 percent of donations would go to the charity of the donor’s choice but, “in email solicitations, [also] to add one percent to each donation.” PayPal Charitable Giving Fund’s 2015 Form 990, accessed on GuideStar, shows that the organization received $1.7 million in program service income in addition to about $37 million in gifts.

PayPal Charitable Giving Fund is operated for the benefit of the nonprofit sector. The program raises awareness and support for nonprofits, primarily through the eBay marketplaces and PayPal. eBay sellers can give all or a portion of the proceeds from their sales, buyers can add a donation to their purchase, and PayPal users can simply make a donation to one of more than 29,000 participating organizations thanks to operating support from eBay Inc. and PayPal. PayPal Charitable Giving Fund grants 100% of donations received through the programs it enables. [Edited for spelling and punctuation.]

In 2015, the PayPal Charitable Giving Fund distributed more than $36 million in grants and other assistance, ending the year with $71,442 in net income and net assets of $1.4 million.

In response to questions about the complaint, PayPal issued the following statement through a spokesperson: “PayPal only recently became aware of this filing and we are reviewing the contents. PayPal and PayPal Giving Fund foster positive change and significant social impact by connecting donors and charities. We are fully prepared to defend ourselves in this matter.”