Climate Change Will Change the Work of Nonprofits

It’s no secret that industrialization has created a number of public health concerns, such as air and water pollution, and chemical contamination of food and soil. But have we considered that global warming may have equally catastrophic effects?

A report from the Medical Society Consortium on Climate and Health mapped how climate change threatens the health of people across the United States and how those threats vary by region. 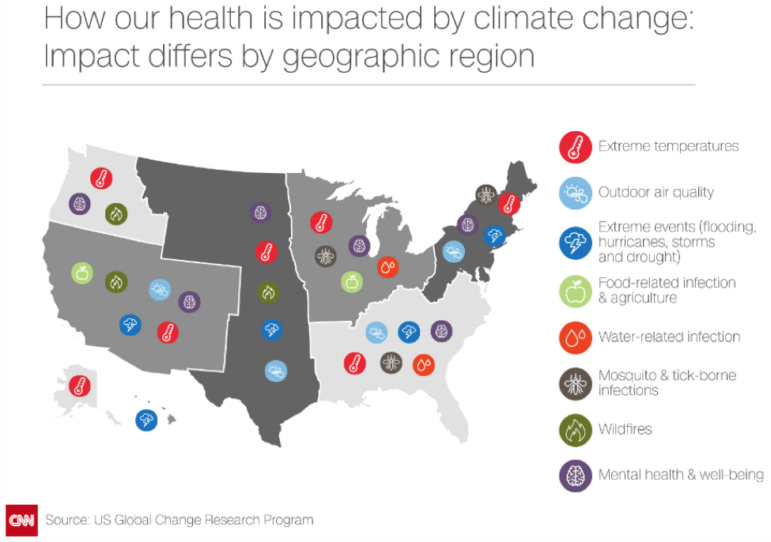 As President Trump attempts to curb both federal environmental regulations and Americans’ federal guarantees of access to healthcare, it may be worth considering that the future public health environment will look different from what we see today.

Rising temperatures, rising shorelines, increases in flooding and other weather events, wildfires, and air quality reduction will impact millions of people. An EPA report concluded that policies to prevent a 2˚ Celsius rise in global temperatures could save 12,000 lives in the next 80 years that would otherwise be imperiled just from extreme heat and cold. The WHO estimates that 12.6 million people are killed each year by unhealthy environments, or 1 in 4 global deaths.

In New England and other coastal areas, rising oceans and rainfall means wetter, hotter environments, where mosquitoes love to grow. Already, outbreaks of Zika, West Nile virus, and other mosquito-borne diseases are popping up in the U.S.; other contaminations to food or water are also a possibility. Other regions of the country face the opposite problem; the National Academies of Science, Engineering, & Medicine estimated that the southwestern U.S. could see a 12 percent reduction in river and stream water with just a 1˚C rise in temperature.

You may have noticed that your allergies are getting worse in recent years. Well, that’s because ragweed and other pollen-producing plants that flourish in hot weather now experience longer growing seasons, and even grow more robustly when there is more CO2 for them to process. (After all, it’s plant food.) According to the journal Environmental Health Perspectives, “When exposed to warmer temperatures and higher levels of CO2, plants grow more vigorously and produce more pollen than they otherwise would.” In addition, increased levels of ozone and CO2 reduce general air quality, causing higher levels of respiratory and other illnesses.

It’s not just allergen-producing plants that are affected by CO2; the plants we eat are affected by it as well, and not in a good way. According to National Geographic, crops that use the C3 type of photosynthesis—a group that includes rice, wheat, peas, and soybeans—have reduced levels of zinc, protein, and iron when grown in high-CO2 environments. Two billion people, or one-quarter of the world’s population, get 60 percent of their zinc and iron through eating these crops that are now increasing their production of carbohydrates at the expense of these essential nutrients. The Gates foundation and USAID have been able to breed cultivars that are more resistant to nutrient depletion, but yields are lower, so it doesn’t entirely solve the problem of shortages.

That’s a problem for Americans, but it’s a bigger problem for people in developing countries. Scientists estimate that areas of northern Africa in and around the Sahel and Sahara deserts will become uninhabitable in the summer months. Countries like Chad, Sudan, Morocco, Botswana, and others will lose huge amounts of habitable land. Seventy percent of Sudanese people rely on agriculture for their livelihood, but increased desertification due to climate change is rapidly reducing the amount of available, arable land. NPQ documented how a dearth of clean water in Chad led to an outbreak of Hepatitis E already this year. In addition, northern African countries rely on their production of cotton, sorghum, millet, peanuts, and sugarcane to sustain their economies, which may become impossible if growing conditions change.

If the displacement crisis in North Africa is bad now, it will only be worse when large swathes of the area become uninhabitable. Crowding in refugee camps is an indirect effect of climate change, but it’s one that is known to have detrimental health effects for millions of people. Even if, as in the United States, people who are displaced by natural events like floods or fires don’t end up in refugee camps, they still suffer mental health wounds. Dr. Mona Sarfaty, director of the program on climate and health at George Mason University’s Center for Climate Change Communication, says, “When people are displaced from their homes because of floods or extreme storms…this loss of home and separation from family and community leads to mental health impacts that can be reflected in substance abuse, alcoholism, domestic strife or violence, depression or anxiety.”

So what can nonprofits do? In the face of rising public health threats, preparation and preventative care needs may change as risk factors alter; as nimble organizations that respond to public needs, nonprofits may see a change in what is asked of them in our warmer future.—Erin Rubin