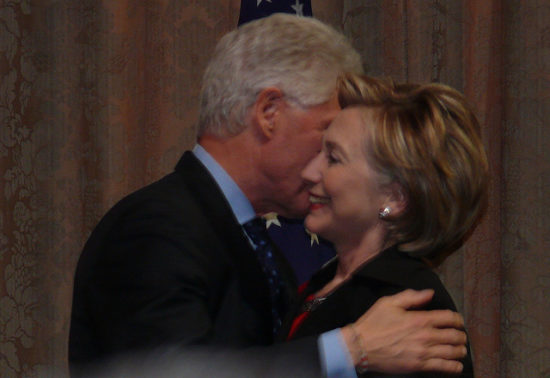 Last Thursday, former president Bill Clinton told the Clinton Foundation staff that the foundation’s Clinton Global Initiative (CGI) would close after its 12th and final annual meeting in September (a week before the first national presidential debate). This last meeting of the CGI is timed, as always, to coincide with the annual session of the United Nations General Assembly.

If Hillary Clinton is elected president, Bill said he would step down from the Clinton Foundation board and stop giving paid speeches. He also promised that the foundation would discontinue its acceptance of contributions from corporate and foreign donors, which, according to the Washington Post, represent more than half of the foundation’s major donors. While this self-imposed ban on select donations would also apply to the Clinton Presidential Center and Library in Little Rock, the Boston Globe observes that large segments of the Clinton Foundation system would remain exempt.

The most prominent of the exceptions applies to the Boston-based Clinton Health Access Initiative, which in 2014 accounted for 66 percent of spending by the Clinton network of charities. The initiative’s board plans to meet “soon” to discuss whether to participate in the planned restrictions.

Clinton’s campaign manager, Robby Mook, further qualified the self-imposed restrictions by telling CNN’s Dana Bash on State of the Union that it will take time for the foundation to wind down its fundraising. “The foundation is doing an enormous amount of work, and it takes time when you’re in a number of countries around the world to retool, refocus the mission, and adapt.”

When Hillary Clinton launched her presidential campaign in 2015, she stepped down from the foundation’s board, stopped fundraising for the foundation, and stopped giving paid speeches.

The Clinton Foundation was founded in 1997 as the William J. Clinton Presidential Foundation and was called the Bill, Hillary & Chelsea Clinton Foundation briefly from 2013–15. The foundation includes many initiatives. The list that follows is merely representative of this sprawling global charity:

The Clinton Foundation could be seen as a prototype of the kind of organization necessary to meet the needs of the 21st century. Charity Navigator had this to say as they threw in the towel on trying to explain the foundation.

We had previously evaluated this organization, but have since determined that this charity’s atypical business model cannot be accurately captured in our current rating methodology. Our removal of The Clinton Foundation from our site is neither a condemnation nor an endorsement of this charity. We reserve the right to reinstate a rating for The Clinton Foundation as soon as we identify a rating methodology that appropriately captures its business model.

If Clinton Foundation initiatives are viewed more along the lines of empowering “impact investing” and facilitation than traditional philanthropy—which, as we know, is rather stuck—is not this new model more likely to leverage the trillions of dollars needed to achieve the foundation’s goals to address climate change and global interdependence? Are not the solutions to today’s challenges uncharted? Is influence an appropriate tool to leverage for the common good, even if this mechanism can also provide a platform and spectacular speaking fees for a former U.S. president and the ability for the foundation to help friends?

Others are not so willing to give the once-and-maybe-future first family the benefit of the doubt. Many Republicans interpret these new pledges to curtail the reach and appeal of the foundation as an admission that there was a conflict of interest to begin with. As NPR reported, scrutiny of Hillary’s emails revealed efforts to connect foundation donors and foundation aides with State Department personnel. The foundation and the Clinton campaign denied anything improper or unlawful occurred during Hillary’s tenure as Secretary of State.

The breaking news yesterday evening, however, was that Laura Graham, the Clinton Foundation’s chief operating officer, left 148 telephone messages for Cheryl Mills, chief of staff during Clinton’s four-year tenure at the State Department, over a two-year period. This may have been improper, given Hillary’s pledge to the Obama administration that she would enforce a firewall between the State Department and the foundation, but it does not necessarily indicate anything illegal.

Other breaking news yesterday evening from Judicial Watch is that 725 pages of newly revealed State Department documents show that Huma Abedin “provided influential Clinton Foundation donors special, expedited access to the secretary of state. In many instances, the preferential treatment provided to donors was at the specific request of Clinton Foundation executive Douglas Band.” Judicial Watch’s president, Tom Fitton, told the New York Times that “It is hard to tell where the State Department ended and where the Clinton Foundation began. They were working hand-in-glove.”

Those involved in what the Clintons characterize as the “vast right-wing conspiracy” of the 1990s are likely to eagerly accept this news as merely more evidence substantiating what they long suspected. They will not easily accept any description of donations received by the Clinton Foundation as being anything other than a tactical investment to face down threats or push for market or governmental opportunities, as a means to “pay-to-play.”

Here is a 10-point fact sheet (perhaps soon to be more points) compiled by the Trump/Pence campaign listing their footnoted complaints about the foundation. Former New York City Mayor Rudy Giuliani suggests that the Clinton Foundation should be indicted on racketeering charges. The Boston Globe reports that former U.S. House Speaker and Trump supporter Newt Gingrich recently had a “staggering” two-hour briefing from the Republican National Committee on the Clinton Foundation, which resulted in Gingrich calling the foundation “a corrupt institution, run for corrupt purposes.”

Despite the juxtaposition of interests that constitute this enduring Achilles’ heel for the Clinton campaign, and despite the continual flow of incriminating revelations, the Clinton Foundation raised approximately $2 billion over the past 15 years for at least ostensibly philanthropic purposes. It is impossible to know whether that mighty achievement would have been possible if currying favor with the Clintons had nothing to do with it. It is also quite possible that the foundation would not be under such intense scrutiny if not for the presidential election underway. This story is rapidly changing, and the NPQ nonprofit newswire will keep readers up to date as matters progress.—James Schaffer