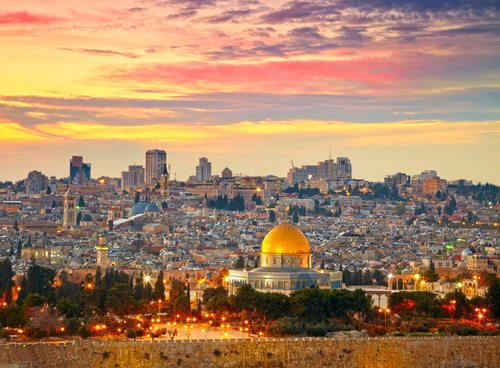 Israel recently closed the operations of three Israeli Palestinian charitable groups affiliated with the northern branch of Israel’s Islamic Movement. The three groups, the Al-Fajar Association for Arts and Literacy, Muslim Women for Al-Aqsa and Ruad Al-Aqsa, were accused of “undercutting the security of visitors to the Temple Mount and caus[ing] an escalation of tension and even disturbances while impinging on Israel’s sovereignty in the complex.”

The Temple Mount is holy ground for both Jews and Muslims. On it sits two of Islam’s most important mosques, Al-Aqsa and the Dome of the Rock. For Judaism, it is the location of the sacred space of the Second Temple, the central focus for Jews until its destruction in A.D. 90. (It’s reputed to have been the site of the First Temple, but that, naturally, cannot be proven.) Control of the Mount has been a point of ongoing conflict between Israel and the Palestinian Authority and the site of protests, demonstrations and violence.

In this heated atmosphere, police say that the charities “are suspected of financing organizations which identify with Hamas, paying activists who go every day to the Temple Mount and when groups of visitors arrive they use verbal and even physical violence against them, in a manner that threatens the personal safety of the visitors and strikes at religious freedom.”

As for the Shin Bet domestic security agency, Haaretz quotes them as saying:

“With the arrival of a group of visitors to the Temple Mount, the activists tend to exhibit verbal, and even physical, violence toward the visitors, while impinging on freedom of religion, and in a way that threatens their personal sense of security of the visitors at the complex. It should be emphasized that the activity of these institutions has caused unrest as flames are fanned in the complex, while the site that is sacred to Islam and Judaism is exploited. In light of this, it has been decided to decree that these institutions are unauthorized associations.”

This action captures the challenge faced by social action and charitable groups across the globe, particularly in areas of social turmoil. In a paper called “Charities and Terrorism Financing Compliance—Approaches and Challenges in 2014,” author Paul Cochrane quotes Rohan Gunaratna, director of the International Center for Political Violence and Terrorism Research in Singapore:

“Gunaratna…considers charities as the fourth line of financing for terrorist groups after individual contributions, ‘legitimate businesses,’ and criminal activities, be it narcotics, arms or human trafficking. ‘It is a very effective method of financing as charities don’t have to pay tax, can earn a lot of money, and many governments provide grants to ethnic religious and social welfare organizations which terrorist groups can use as a front and to create sympathetic groups with charitable status,’ he said.”

Chief Justice John Roberts framed this struggle from an American context when he ruled in Snyder v. Phelps:

“The First Amendment protects our right to express ourselves, and the depths of our opinions and emotions, in the most strident terms,” he wrote. “Speech is powerful. It can stir people to action, move them to tears of both joy and sorrow, and—as it did here—inflict great pain…[but] we cannot react to that pain by punishing the speaker. As a nation we have chosen a different course, to protect even hurtful speech on public issues to ensure that we do not stifle public debate.”

In its 2009 study, “Blocking Faith, Freezing Charity,” the American Civil Liberties Union found that “the government’s actions have created a climate of fear that chills American Muslims’ free and full exercise of their religion through charitable giving, or Zakat, one of the ‘five pillars’ of Islam and a religious obligation for all observant Muslims.”—Marty Levine